Timothy “Tim” George Hodgkinson (b. 1949, Salisbury, Wiltshire, England) is an English experimental music composer and performer, principally on reeds, lap steel guitar, and keyboards. He graduated in social anthropology from Cambridge University in 1971 but chose to pursue a musical career instead. His interest in anthropology, however, has remained and he drew on it later during a series of study trips to Siberia. He first became known as one of the core members of the British avant-rock group Henry Cow, which he formed with Fred Frith in 1968. After the demise of Henry Cow, he participated in numerous bands and projects, eventually concentrating on composing contemporary music and performing as an improviser. 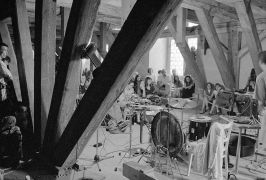