Worlds Beyond the Poles

I came across this name and idea, while working on the research on Athanasius Kircher and Comenius in 1993 in University Library in Amsterdam.

In 1959 Francis Amadeo Giannini published a weird book entitled Worlds Beyond the Poles. He was probably born in the late 1800s or early 1900s—maybe on exact a date as 1898, as the Oregon death index has someone by that exact name being born (somewhere) on 3 October 1898 (and dying in Multnomah County on 26 November 1973). But besides the name—which was not uncommon—and the approximate date of death, there’s nothing else to suggest this is the same Francis Amadeo Giannini who joined the Fortean Society in 1944, least of all the location of Portland, Oregon.

In his book he put forward his theory that the earth is linked to the moon and planets by a continuous land surface. He came to the idea of an interconnected universe while walking through the New England woods in October 1926. The images came to him via ESP. So impressive was the vision that he took to buttonholing potential patrons—he was, in his words, a “new Columbus” in search of a Queen Isabelle. He also quoted a radio announcement supposedly made by Admiral Byrd from his arctic base in February 1947: ‘I’d like to see that land beyond the Pole. That area beyond the Pole is the center of the great unknown.’ He claimed that on this northern polar flight, Byrd had flown 1700 miles ‘beyond the earth’ before returning to his base, and had passed over “iceless land and lakes, and mountains where foliage was abundant. Moreover, a brief newspaper account of the flight held that a member of the admiral’s crew had observed a monstrous greenish-hued animal moving through the underbrush of that land beyond the Pole”.

Francis Giannini interpreted the ‘land beyond the pole’ to be celestial land connecting the earth with the moon and other planets. His story about Byrd’s 1947 flight was repeated in the December 1959 issue of Flying Saucers journal in a sensational article written by the editor, Ray Palmer, who used it to support the hollow-earth theory. Palmer claimed that Byrd must have flown part-way into the earth’s hollow interior, and that this truth had been covered up. He also argued that flying saucers came from within the earth. There was one small problem with the story about Byrd: in February 1947 he was officially in the Antarctic, not the Arctic! He was Officer in Charge of the huge US Navy Antarctic Expedition, Operation Highjump, involving 13 ships manned by 4000 men. According to his article on the expedition in The National Geographic (October 1947), Byrd arrived in Little America on 29 January 1947. On 15 February two planes, one of them piloted by Byrd, flew to the south pole, and then into the ‘mystery land beyond the pole’, as Byrd calls it. They flew about 100 miles to latitude 88°30’S, then turned eastward until they reached the 45th east meridian, when they turned back to Little America. Altogether they surveyed nearly 10,000 square miles of ‘the country beyond the pole’. According to Byrd, all they saw there was a ‘rolling white desert from horizon to horizon’. Byrd says that this flight from the base and back covered 1800 miles and took 12 hours. They evacuated Little America on 23 February and arrived back in the US on 14 April.

On 2 February 1947, columnist Bob Considine wrote up Giannini’s ideas for the Washington Post, using as a hook Giannini’s exhortation that Byrd should continue past the South Pole and onto Mars. Considine—who would write a biography of Robert L. Ripley in 1961—made it clear he thought Giannini was a kook. Giannini seems to have drifted from the Fortean fold by this time, as Thayer only heard about the articles from other Forteans who sent in clippings (Doubt 18, July 1947, 268).

Probably, Thayer tried to contact Giannini in the wake of this publicity—and the continued stories about Byrd. But, if so, he had no luck. In Doubt 25 (Summer 1949), Thayer listed Giannini among the “Lost Sheep.” “Who can help us find any of these MFS?,” he asked. But no one responded—Giannini remained a lost sheep, at least as far as the Forteans (and I) could tell.

In 1959, he published a book through a vanity press—Worlds Beyond the Poles. Supposedly, this was an expansion of a 1958 publication “Physical Continuity of the Universe and The Worlds Beyond the Poles: A Condensation” (which is the same title as the manuscript he presented to Thayer), but I have seen no sign this earlier work was ever published. It was in Worlds Beyond the Poles that he Giannini gave the history of his ideas, and his attempts to get others to support him. The list of dedicatees is bizarre, including A. P. Giannini, who had refused to give him money, Wilkes, who dismissively said he’d check out his theories, Byrd, who Giannini mischaracterized in order to find support for his theory. And Ray F. Smith—which just happens to be the name of a Fortean active in the late 1950s. The connection remains obscure.

Hollow Earth and Mundus Subterraenus: We live inside, drop in and see us!
Meridian Crossings: Hermit IV.
Athanasius Kircher (1602 – 1680): inspiration, inventor, patron of the Hermit Foundation 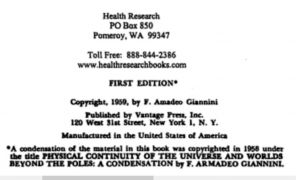 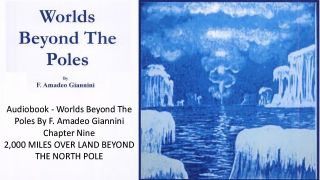 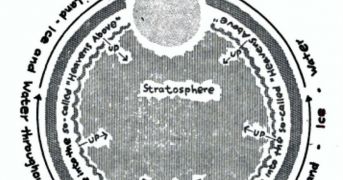 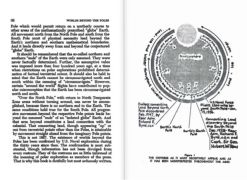