"The Installation 'Birds' is a mobile sound object which does not need, I guess, any intellectual interpretation. It is amplified by moving the stick or with applying strong pressure on the bow. One plays in the lower part or the foot by a strong pressing down on the bow."

Luboš Dalmador Fidler worked and performed in the Plasy monastery together with the musician, poet and guitarist Oldřich Janota.

In the early 80s, Janota disbanded Mozart K and changed his genre, starting with experimental guitarists Luboš Dalmador Fidler and Pavel Richter. The group practiced interweaving acoustic guitar strumming, alternative tuning system, involved record players, tape recorders, radios or DIY instruments, such as the roletophone (amplified window blind-wand), constructed by Luboš Fidler. In the grip of minimal moods - listening to Terry Riley and Robert Fripp - they concluded that circles of arpeggiated chords are a good departure point. After 1989, Janota became associated with the "tea-room culture," establised a trio with Irena and Vojtěch Havel whose music often fuses old music with Eastern influences. in 1992 and 1993, he performed with the ensamble Jiná rychlost času, and with Luboš Fidler. Recently, Janota has been touring with the ensemble Ora Pro Nova. Janota publised several books of his texts and stories, and composed the opera Koza about the "Left Hand Universe." 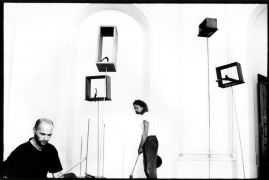 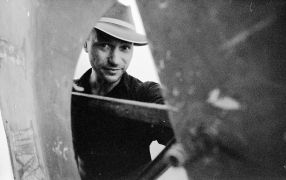