David Horan is a member of the photography faculty at The University of Memphis Department of Art, where he teaches both traditional and digital photography courses, as well as the history of photography and art history survey courses for the past 30 years. He also teaches a Study Abroad course in digital photography techniques through the U of M Study Abroad program at The Florence University of the Arts in Florence, Italy and in Machida, Japan. His work has been exhibited throughout Europe and Asia in such galleries as The Reina Sophia Museum, Madrid; The National Gallery of the Czech Republic, Prague, The Vardo Foundation, Stockholm; Fujin Kaikan, Hiroshima, Japan; The FAI_R Gallerie in Florence, Italy, The Warehouse Gallery in New Paltz, New York; and The Memphis Brooks Museum of Art.

Petr Lysáček (1961 Ostrava) uses a wide range of media: installations, objects, photography, painting, video and performance. He had already made a name for himself while studying at the Academy of Fine Arts (AVU), where he was involved in the art world as a member of the Pondělí group (founded in 1989). The work of individual members of the group shared certain common elements, amongst other things a sense of distance, irony and humour. Though these qualities later disappeared from the work of certain members, Petr Lysáček’s oeuvre continues to display these features. At present Lysáček lives in Prague, though after completing his studies he lived for many years in his active Ostrava and had a large influence on the local scene (along with Jiří Surůvka). Along with other Ostrava-based artists he organised a host of controversial events, including the Malamut festival of action art, which became one of the most important shows of this type of art on the Czech art scene (1994-1998). Since 1994, Petr Lysáček has been head of the studio of intermedia forms at the faculty of fine art at Ostrava University, where he makes regular trips from Prague.

Lysáček often works with ready-mades and new-dada, and uses these elements to undermine established form and content. He is a master at processing found objects. He recycles these objects and creates new links through his own interventions. Certain of his objects and installations express deeper spiritual symbols, which are then subjected to irony, a typical feature of his work. This applies in the case of an early installation entitled Crossroad (1993), in which the artist used a small bogey carrying a child’s highchair located on rails which spread out in three directions so making movement on the rails impossible. The highchair represents the world of the child, which, as opposed to adults, will find solutions to insoluble problems. The installation is a symbol of creativity – someone will find a way forward. The rails could continue into the unknown and the work involves the encounter of two realities: the first is the practical world, and the second is that which lies behind it. 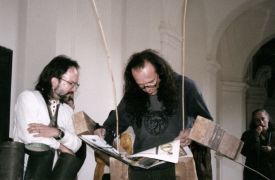 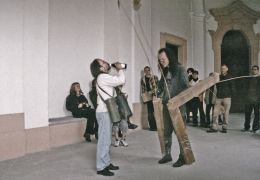 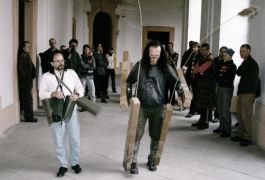 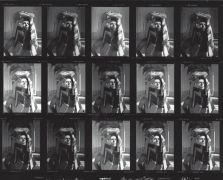 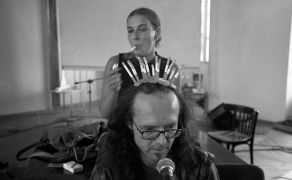 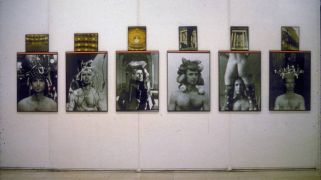