“The Mehedaha Theater was established in 1985 among a group of friends of artists, whose artistic experiments spontaneously turned into puppet performances. At the heart of the performances are visual and musical creations, occasionally made in flats, at vernissages, at various meetings, and in theaters. The most common productions were ballets, dances, sketches and minor absurdities.The theater didn’t have programs or scripts.

For each performance, I recruited new collaborators at random. The ensemble collaborates with many individuals and musicians. It is a kind of concentrated happening, always based on the current situation. The puppets are either our own creations or whatever is implemented from the ever-expanding inventory of toys, stuffed animals, machines, and various refuse, but also including a number of classical puppets. The marrionette style of puppet is the most often used, but recently, the form of the classic “watch” [sic] gains in performance with masks, disguises, objects and shadows.

The Mehedaha Theater does not specifically tell stories. It presents one endless story of revelation and disappearance. Playing with everything, the only scenographer is the world. Things are thus disconnected from their established relationships, and stand apart as their own phantoms, with associations of what they remind us. None of those dances or games have any other motive than just a playfulness. It’s a completely free improvisation, counting on an active viewer. Even the actors themselves are actually viewers, watching and reacting to the game.

The Mehedaha Theater is an experimental laboratory for mixing the most controversial elements. It does not create art-like illusional decorations (with some exceptions), playing directly with water, ice, snow, fire, sand and grass. The only constant of the Mehedaha ensemble is the permanence of its two flat theaters, regularly organizing their meetings.”

Petr Nikl (b. 1960) is a fundamental phenomenon in the Czech art scene since the 1980s. His creative activities have always transcended the personality of a painter, as he is active as an actor, singer, puppeteer, writer, publisher and performer. In the beginning of the 1990s, he was a member of the legendary Tvrdohlaví (Hard heads) group. He is a founder of the theatre ensemble Medehaha, he was behind the collective exhibition Nests of Games in Prague’s Rudolfinum Gallery in 2000. Nikl represented the Czech Republic at EXPO 2005 in Aichi, Japan.

Often returning to the world of childhood, Nikl’s paintings depict a confrontation of innocence and the discovery of identity, representing a parable of a world which was forced to stop working under utopian visions and enter a stage of adulthood. Even the form of his paintings dwells on the stage of innocence, while their perfect aesthetics retains a peculiar secret.

Jiří Černický’s work is full of expressive transformations, extreme gestures and also particular humour. Each of his works hides a strong story both in the content as well as at the level of seeking adequate expressive resources. Should we wish, nonetheless, to formulate a certain common denominator, then it is essential to mention first and foremost his incessant ability to express an almost childlike wonder and, at the same time, a willingness for open communication, often exaggerated to the point of conflict. Indeed, it is the strategy that these two components express which allow Černický, as if part of perfunctory surfing trip, to expose the dominant waves on the surface of contemporary society. A certain ambivalence of creative principles otherwise appeared in Jiří Černický’s first essential work, Slzy pro Etiopii (Tears for Ethiopia, 1993-94). From rubbish containers located at the Emil Filla Gallery in Ústí nad Labem, Černický collected the tears of local residents, who after a month of toilsome pilgrimage, handed them over to the abbot of the monastery in the Ethiopian town of Lalibela. A limited pathos and creative aloofness crossed paths with personal engagement, and the artist’s intense physical participation in this project. 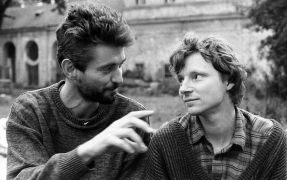