This Brno-based avant-garde rock group, formed in 1995 by Ivan Palacký, closed their activities in 2002.

Their music was often characterized as Chamber Rock, although the group used alterative terminology to describe their activity, including Meditative Rock’n’Roll, Unpopular Songs and Restless Beauty. The group played many concerts and performances in various venues across the Czech Republic and have appeared abroad in Austria, Belgium, France, Italy, Slovakia and Spain. 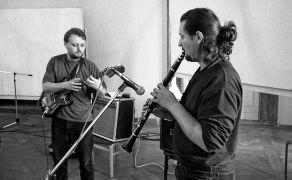