Svend Thomsen: The Archive of Nothing

Svend Thomsen presented for the audience of 'Hermit' a part of his collection of video recordings of famous audio artists 'The other Voices.' Thanks to him, the audience could see performances of Hugh Davis, George Maciunas, Logos Duo, Hans van Koolwijk, Max Eastly, Emmett Williams, La Monte Young and others. Mr. Thomsen also recorded many performances in the monastery and placed his own installation 'The Archive of Nothing.'

Svend Thomsen is a Danish film maker and video artist living and working in Brussels. In 1971, while traveling in Germany, Holland and France, he was acquainted with a new phenomenon within the art world: VIDEO ART. In 1977 he changed his study department at the School of Architecture in Copenhagen and started at the Department of Visual Communications - AV - Lab, where he explored the video medium's potential as an artistic tool. He got engaged in the video documentation of Billedstof Theatre's first major show at the Glyptotek, a 24-hour concert at the Open Scene, and documentations of Living Movements rehearsals and performances at the same place with a Black and White SONY Porta Pack.

In 1983, he took the initiative for the formation of the TREKANTEN (the Triangle) - Audio Visual Gallery and Art Space, in Copenhagen. It evolved from being the first video group to an "institution" for the 'new' art forms, where videos were produced and video art from England and Holland, Germany and elsewhere was presented, along with performance. Dance performances and music were the content of the numerous events TREKANTEN stood for until 1990. In 1985, one of founding members, Tim Groot, returned to Amsterdam. A video production company, Trekanten Video Formidling (TVF), purchased second-hand U-Matic editing equipment and produced video for dance companies, visual artists who needed video productions - apart from our individual and group productions created during those years. TVF was now a video production company specializing in the documentation of 'Time Based Art.'

"In 1990, TREKANTEN dissolved and continued until 2001 under the name of 'artcinema OFFOFF,' where I, together with a small group of people, for more than ten years presented the Experimental film history and development from 1920 to the present day. TVF continued as his video production company and the archive became bigger and bigger as the number of productions. Video equipment was upgraded as time went by, costing money which had to be earned with documentation work. But the biggest part of the productions were non-paying jobs, so we had to earn this amount through paid jobs." 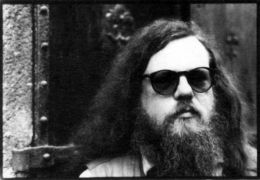