The significance of this performance is to condense and highlight the ideological aspects of pop culture music; the implied ideological meanings underlying the seemingly neutral nature of techno music. Techno seems to be an anonymous music, a rhythm and an augury of man's functioning in a separate, technical and technological civilisation, which is beyond any culture. Techno is the ideology of a new lifestyle, a way of thinking and reacting to the world, in the world at the end of ideology.

Ecstasy – a chemical agent stimulating the physical efficiency of an organism, providing one with the illusion of superhuman power –  is inherent in techno music.

An irritating, artificial rhythm dictated by two dolphins – trashy gadgets, the rhythm of two rotating fans, a rhythmical stroboscope, a flickering laser beam, ultraviolet light, smoke and rapid, extremely loud techno music are in contrast to the slow behaviour of the performers and their chic clothes (suits, white shirts, bow-ties, dark glasses, neat hairstyles). Mirrors, hammers, sickles, white gloves, a violin, violin case and clocks are touched very slowly by the performers, raised and put down by the artists sitting passively, opposite each other at a large, black table. A minimal delay and the repetition of the actions by the female-performer, as well as more gentle way of presenting them, introduced the notion of women's disbelief in the utopia created by men. The rapid rhythm of the techno music provoked an aggressive, extremely dynamic reaction within the performers and audience. The performers act against this and, in the final phase, stand stock still, holding simultaneously large wall clocks fully lit and completely silent.

Wladyslaw Kazmierczak was born in 1951 and currently lives in Slupsk, Poland. He was educated at the Academy of Fine Art in Cracow (M.A.), and first began creating performance art actions in 1979. He has presented over 150 performances in Poland, Belgium, Canada, France, Italy, Slovenia, Germany, Great Britain, Hungary, Czech Republic, Belarus, Ireland, Japan, Korea, Lithuania, Romania, Slovakia, Mexico, Indonesia and Switzerland. In 1997 he began creating collaborative works with Ewa Rybska. Kazmierczak is the director and curator of the Baltic Gallery of Contemporary Art in Slupsk, Poland, and is also the curator and organizer of the Castle of Imagination International Performance Art Festival which takes place annually in various locations throughout Poland since 1993.

Ewa Rybska was born in 1958, and studied at the College of Art and Design in Minsk Mazowiecki, Poland. Since 1994 she has been working as a curator of the artistic programme at the Baltic Gallery of Contemporary Art. She is also a co-organizer of the annual Castle of the Imagination International Performance Art Festival. Following her interest in multi-media visual art, she has been active in the initiation and administration of several international artist-run projects, including exchange exhibitions, festivals and artist residencies. Since 1997 she has been creating performance art works in collaboration with Wladyslaw Kazmierczak, performing in Slovakia, Italy, Germany, Czech Republic, Belarus, Ireland, Slovenia, Mexico, Indonesia and Poland. 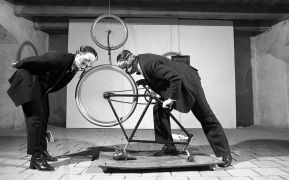