"The installation Dynamic Panoramaphon makes use of 7 tape recorders and a number of simple instruments, which are played mechanically. The tape recorders transform the sound of the instruments assisted by recording studio techniques. The tapes on which the instrument sounds are recorded, accelerated, delayed, stretched, and played in reverse.
The tapes are blank and all information is recorded live. Ten speakers are connected to the appropriate tape recorders so that the development process can be easily discerned in every stage of the installation. The tape transport system is enhanced by studio techniques which creates a sound picture that is capable of continually producing different features.
The installation has been designed to utilize the natural sound characteristic of acoustic instruments. The sound is not 'improved' or altered with use of an electrical apparatus. Tape recorder technology allows an individual sound to be removed and reused in a new context.
Only a small portion of all available sounds are ever heard by most people. The huge oceans of sounds waiting to be unleashed is the purpose of my experiments with 'sound pictures.'  In Plasy I made two performances on 21st of June in St. Benedict Chapel. The first was with Anna Homler, the second solo."
Ad van Buuren, 1992

Ad also performed in Prague at the Delta music club.

Ad van Buuren (1951–2014) was a Dutch sound artist, born in Breda, educated at the Academie van Kunst en Vormgeving, Den Bosch (1976–1980). He lived and worked in Den Bosch. The aim of van Buuren’s installations is to generate sequences of haphazard, unpredictable and chaotic sounds. Tones are evoked by artificial neural networks comprising circuits with relays. The work of these analogue circuits is programmed to resemble the activity of neurons in a human brain. The unbridled chaos that arises through it is then restrained by previously fixed parameters. Sound sources used in Ad van Buuren’s installations include forest, reed, tone generators, fans, organ sounds, ticking and clicking of relays, strings, bells, as well as many others. 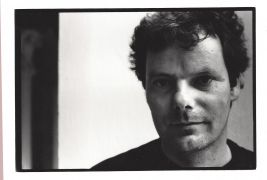 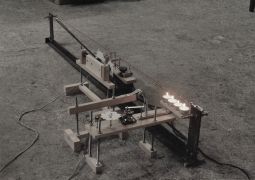 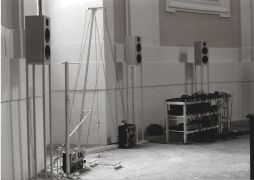