"This ceramic sculpture (170 x 180 x 200) was constructed without a supporting structure. It is composed of 16 fragments and was made in June, 1993. In July and August, the sculpture slowly dried out, shrunk and became lighter and more pale. In September, the sculpture was dismantled and transported to the factory to burn in an oven.

Čestmír Suška (born 1952) studied at the Academy of Fine Arts in Prague and entered the unofficial scene of Czech art in the late 70s. Suška was a member of the Tvrdohlaví group. In the 1980s, he was among art organizers, organized a meeting in his village house in Malechov in Klatovy (1980 and 1981) or an exhibition of statues and objects in the courtyards of Malá strana in Prague (1981). Suška created spatial installations imbued with an existential feeling. In 1981, he co-founded the Art Theater Kolotoč which combined visual elements - objects, masks, film and slide projections - with acting and music. Later, his work employs grotesque, colorful archetypal themes, characteristic for the Czech postmodern. In the 90s he created figurative sculptures of clay, animated by an inner light. Until 2005, wood has been the most frequent material used in his work. A series of fused glass sculptures was created between 2002 and 2005. After coming back from the USA, he started  to carve ornament patterns into found cylindrical iron tanks or spheres. Inspired by artist residences at the Sculpture Space in Utica (NY, USA), in 2000 Suška established i in the Bubec Sculpture Studio in a former warehouse in Řeporyje. 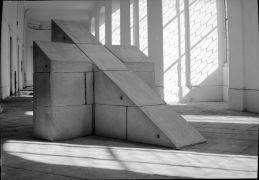 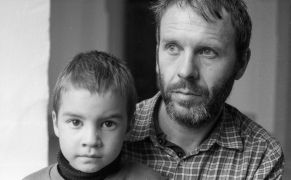