During the Second World War the Jews in Libeň were gradually deported to concentration camps. In 1941 the Libeň Synagogue was shut down and converted to a warehouse storing confi scated Jewish property just as all other synagogues in the Czech Republic. After the war the decimated Jewish community was never revived in Libeň. Shortly thereafter anti-Semitism strengthened again, this time under a diff erent ideological label and this caused the synagogue to further dilapidate. It kept being used as a warehouse. Initially as a produce warehouse, later the nearby S. K. Neumann Theater (today’s Pod Palmovkou Theater) stored their props here. At the end of the 1950s Bohumil Hrabal worked here as a props technician. At that time he lived in the nearby house Na Hrázi no. 24. Several blocks were taken down in the immediate vicinity of the synagogue in the 1980s relative to the construction of the B line metro stop Palmovka. Th is has also put a defi nite end to the original rabbinate, which was the administrative building for the synagogue as well as the entire Jewish town. The synagogue itself was removed from the demolition plans just at the last minute. Following 1989 the synagogue was returned to the Jewish Community in Prague and since 1995 the building, to that day known under the name Synagogue in Palmovka or Libeň Synagogue, started to be regularly used for social events organized by the Serpens Association. Its main objective is the organization of artistic, theatrical and musical events and the mutual connecting of individual fi elds of art.

Absent friends installations reflected the heavy history of the building and the memory on the Jewish population in Prague in general. The name relates to goddess Kleió Clio, Κλειώ,  the Greek Muse of Historiography – the daughter of Zeus and the goddess of memory Mnemosyne.

Shelagh Wakely (1932 - 2011) was part of the alchemy of the British Sculpture Movement of the 1980s, with fellow artists Richard Deacon, Shirazeh Houshiary, Barry Flanagan and Anish Kapoor, amongst others. With a prolific career spanning more than four decades, Wakely produced an impressive body of work comprising sculpture, installation, drawings, prints and video.was a pioneer of installation art. Born in the small village of Madingley, Cambridgeshire, in 1932, Wakely spent much of her youth in Kenya where her family lived a privileged colonial life. She returned to England as a teenager to study agriculture, but quickly turned to the arts, studying painting and screen-printing at the Chelsea College of Art (1958-1962). Wakely worked as a textile and clothing designer through the 1960s but a research fellowship at the Royal College of Art (1968-1971) led her to turn to sculpture. Early exhibitions were held at the Serpentine Gallery, London, (1977); ICA, London, (1979) and John Hansard Gallery, Southampton (1982). These shows cemented her reputation as a multifaceted artist: installations, sculptures, drawings and paintings all incorporated across the breadth of her practice. Later landmark exhibitions include The British School at Rome, 1991, where she was a Fellow, IKON Gallery, Birmingham, 1992; Museu do Acude, Rio de Janeiro, 1993; and an outdoor installations, Rainsquare installed at the South London Gallery in 1994 and Angel Row Gallery, Nottingham, 2002.

Ron Haselden (b. 1944) is a British artist, he works with light, sound, film and video, often as part of architectural projects. Ron was born in Kent and attended the Gravesend School of Art. After teaching for a number of years at Reading University he moved to France. Haselden was awarded an Andrew Grant scholarship to study sculpture at Edinburgh College of Art (1961-1966). He taught sculpture in the Department of Fine Art at Reading University and founded the mixed media field in the early seventies.
Haselden was awarded the Sargant Fellowship at the British School at Rome, Italy, and during the course of his productions he has received awards and grants from numerous funding bodies as well as being represented in many private and public collections which include The Arts Council of Great Britain, The Lorne Award, The Hamlyn Foundation, The Elephant Trust, The Esmée Fairbaim Foundation, The London Arts Board, The Henry Moore Foundation, The British Council, The RSA Art for Architecture Award Scheme, Alliance Française, Conseil Général Côtes d’Armor and le Fonds Régional d’Arts Contemporain (FRAC) de Brétagne, Bibliothèque nationale de France. Much of his sculpture is concerned with light in constructions, photographic works and video. The three-dimensional work ranges from a minute scale to large performance productions involving up to 400 participants which take place in major cities in Europe. Some sculptures are permanently installed in public spaces throughout the UK, whilst other work is conceived and installed in galleries or for limited periods of time in rural landscape locations. His work is represented by LUX online.

Sharon Kivland (b. 1955, USA) lives and works in London and Pleslin, France. Apart from her activities as an artist and curator, she also engages in theoretical investigations, both teaching art at Sheffield Hallam University and as a Research Associate at the Centre for Freudian Analysis and Research in London. Since 1979, she has taken part in numerous solo and group shows in Europe and North America. The main medium in Sharon Kivland's work is color photography. Further major areas of activity are objects of metal, leather, cloth, glass, mirrors and so on. The two approaches may be combined; and in both, written text is often a complementary element. In her work, Sharon Kivland investigates how our lives are governed by systems of order that complement, overlap and contradict one another while undergoing periods of change continually. Spheres such as language, gender, time/space, art, philosophy, politics, nature, history, and economy are involved. The focus of this approach is represented by the identity of woman and her body.

In collaboration with Serpens and the Center for Metamedia from 1996 to 2000, in addition to CLIO, there were was also staged an exhibition of Max Streicher; an audiovisual installation by Michal Krondl and Petr Hrůza; and a sound installation by Mario van Horrik and Petra Dubach, all curated by Martina Pachmanová. 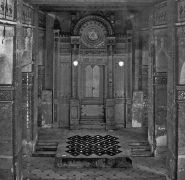 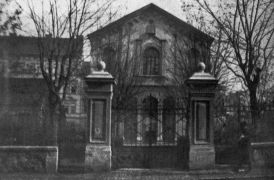