Between Earth and Sky
Site-specific installation

Erna Verlinden found the location for her installation in the run-down basement space under the Saint Benedict chapel. Until recently, there had been a car repair workshop there. Jiří Zemánek described the installation as a “parallelity between natural and imaginative processes.” On the floor of the dark oval large room, Erna made a huge circle from white kaoline. Four small containers were hung from the ceiling, filled with red liquid and two ropes were submerged on one end into the liquid. The coloured liquid ascended by capillary absorption and dropped into the white circle on the floor, slowly drawing the shape of a red cross — a symbol of equalizing contradictions.

The image originates from dynamic changes between the idea and the given space and is based on the symbolic meaning of natural and architectural principles. Originally in my perception there prevailed the natural movement of particular objects, such as the wind and the stalks. Long-term and detailed study of natural motion processes has finally led me to a better understanding of basic structures. What appeared to be complete freedom on the surface, turned out to be tied to natural laws. This experience has led to a change in my work: from concrete objects to universal processes, from matter to development, from individual to universal, from intuitive and instantaneous commitment to a greater distance of understanding. The material (porcelain) has remained, but no longer acts as a special medium, but as a link in the “natural tension” network.

Erna Verlinden (b. 1953, Niel) is a Belgian visual artist working mostly in the discipline of drawing, installation and sculpture. Studied between 1980 and 1984 at the Koninklijke Academie voor Schone Kunsten Antwerpen 1984 – 1987: Nationaal Hoger Instituut Schone Kunsten Antwerpen, 1989 atelier Sueharu Fukami, Kyoto, Japan, atelier Saichi Matsumoto Japan. Since 1992 she has been teaching at Koninklijke Academie voor Schone Kunsten. She uses physical and aesthetic qualities of porcelain and clay. 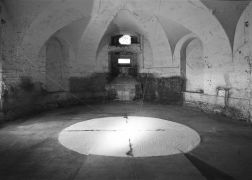