"The Bell Tower was a site-specific solo performance, an inscription of the human body and voice onto the granary´s clock tower. I used what I found in the environment (sonically, physically and energetically). The hypnotic ticking of the clock, the ringing of the bells, the height of the tower, the dangling weights, and even the visitations of resident bats were all information or actors in this symbolic portrayal of death, time and continuity."

"My memory is a little foggy, but what I recall the most is fear. The piece was about conquering fear, the ultimate fear…of death. I was-and still am-terribly afraid of heights and falling. I was clinging to the rope for my life. I had set up something to instigate my fear of heights, but what I didn’t know at the time is that the bell tower was also full of bats. My fear of falling pales in comparison to my fear of bats. Bats are potentially lethal flying rodents that would become entrapped in my long curly hair. So, I began to braid my hair every day before I went to the tower to set up and rehearse. I think one of the other artists gave me a hat or a kerchief to cover my hair. I think some people were kind of amused: the American girl and her fear of bats. Ultimately, I did conquer my fear and I performed the piece. When I was done, I confided in another artist that the piece was about conquering my fear of death, living through death. She said that then I would never have to do another performance piece. Oddly enough, this was the case. It had unintentionally been my swan song and marked the end of my career as a performance artist."
Ester Amy Fischer, 2018 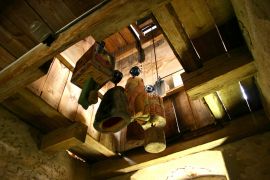 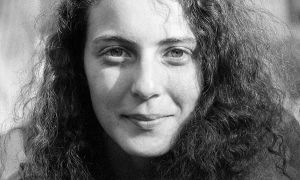