František Kowolowski (born 1967 in Třinec) is part of the Ostrava art scene which became popular in the mid-1990s. Starting in 1986, he studied at the studio of Jan Tarasin and Ryszard Winiarskiego at the Academy Sztuk Pięknych in Warszawa, from which he graduated in 1991.

In 2000, he was one of the finalists of the Jindřich Chalupecký Prize. He lives in Brno, where he works as a curator (Moravian Gallery in Brno, 1994-96; Brno House of Arts since 2000) and teaches at the Faculty of Fine Arts of the University of Ostrava. Together with Jiří Surůvka and Petr Lysáček, he is one of the members of the group František Lozinski.

His performative work is characterized by his artistic research and through his own physical deployment as the model of socially critical and ironic subversion. His more material works, such as installations, are typically processual and project some sense of instability. 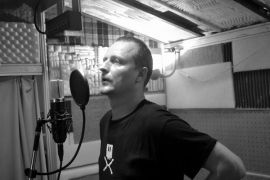