Franziska Baumann (born April 9, 1965) is a Swiss musician and composer, specializing in improvisation and composed music (vocals, flute, live electronics. As a vocalist she explores the human voice as a multi-faceted instrument expanding traditional boundaries. She has developed an extensive vocabulary of experimental and extended vocal techniques such as multiphonics and glottal clicks and a variety of unique microtonal, timbre-modifying and percussive vocal techniques that have become her "signature sounds". Her research interests include the voice as a medium between instrument and potentials of human feelings and human society by causing unusual ways of listening and consciousness.

As a composer her repertoire is diverse and includes commissions for electroacoustic and improvised projects to experimental radioworks, large-scale site-specific sound environments and installations, all of which are characterized by a very personal language.

As "artist in residence" in the STEIM "Studio for ElectroInstrumental Music", Amsterdam, she developed an interactive SensorLab based Sensorglove. Mainly in solo performances she uses the Sensorglove. This interactive SensorLab-based cyberglove (her own development while staying at the STEIM Studio for ElectroInstrumental Music in Amsterdam) gives her total control over her articulations and the acoustics via gestures and movement.

She is a professor for non-idiomatic improvisation-composition and vocal performance at the Berne University of Music, Switzerland. 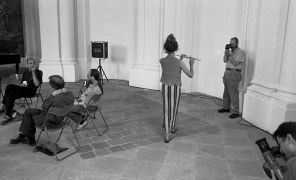