"An installation in a 17th century granary, a symmetrical space with three cross-vaults of equal size, whitewashed walls and a plain wooden floor. Light enters only from opposite grated apertures in the middle of the third segment. Coming in, you see a white wooden chair central in the space, and a white object apparently hovering in front of an intense, unfathomable darkness. When yours eyes grow accustomed to the dusk, the black turns into a Prussian blue surface that seems to move towards you.

You sit down on the chair, let the blue advance and the object attain contour – a semicircle in which two stairways come together at the top. The faint light makes you realize only after some time that the stairs are inverted: the steps point downward. While Guus Koenraads has put the space into apparent motion by this touch (painting the back wall), this wooden piece folds and unfolds before your eyes. A serene unearthly breathing."

Guus Koenraads (1949) is a Dutch artist who was born in Eindhoven. He lives and works in Nuenen. He graduated from Jan van Eyck Academie, Maastricht and was proposed by Paul Panhuysen. 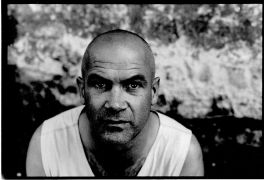 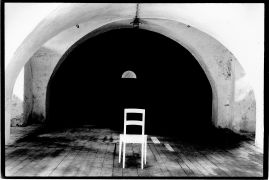