Installation of 45 white stripes (8 x 60 cm), on each words printed in black letters. The signs were used for orientation in supermarkets. I hung them up at the center poles of the ceiling construction of the room. On the floor was an installation of 6 piezoelectric melody generators, each of which was attached to a paper bag of instant food."
Daniela Kieß-Kubiczak, 1992

"Installation of 36 solar panels and 23 piezoelectric transducers at six windows on one floor of the granary building. The variety of frequencies and sound patterns of the transducers are modulated during the day by the position of the sun and the intensity of the sunlight." Harald Kubiczak, 1992

Daniela Kieß (born 1965 in Stuttgart) studied theatre arts and directing at the Universities of Erlangen and Frankfurt a.M. She started her artistic work with theatrical performances and eventually began to work as a painter, installation artist and poet. She is co-founder of Kästrich*, an independent art forum in Mainz.

Harald Kubiczak (born 1957 in Mainz) studied design in Mainz and theatre arts with a Fulbright grant at Syracuse University. He works as a visual artist and designer as well. He is co-founder and from 1990 to 2000 director of Kästrich - an independent art forum in Mainz. Since 2009 he publishes books on art with the circuit-art label.

Kästrich was founded by Daniela Kieß and Harald Kubiczak in Mainz in 1990. In that year a former tobacco store in Mainz, situated in an abandoned house was rented. The name for the space simply derived from its location: the street’s name Kästrich, house number 39. Within the next nine months, eight exhibitions followed. In 1991 the house was to be sold, and the search for a new location began. In the fall of that year, another address was found in the same part of town—another former tobacco store that had been out of use for many years. There, the exhibitions began again in 1992 and continued until 2000, when Kastrich closed and was no more.

In the beginning, the Kästrich program was a rather coincidental series of exhibitions. After moving to the second location though, the program could develop identity and continuity with an emphasis on installations and works that not only reflected the conditions of the space but also worked using sound. More than 70 artists participated in the program of Kästrich, some of them have international reputation, as Jacoba Bedaux, Jens Brand, Ad van Buuren, Bruce Checefsky, Michael Delia, Thomas Hannibal, Mona Higuchi, Jerry Hunt, Guus Koenraads, Rolf Langebartels, Richard Lerman, Ronald Medema, Phill Niblock, Paul van den Nieuwenhof, Jürgen O. Olbrich, Paul Panhuysen, Nico Parlevliet, Anke Schulte-Steinberg, Dan Senn, Relly Tarlo. The entire activities were realized without public subsidy or commercial sponsoring.

circuit-art The publishing activities of circuit-art (founded in 2009) are a continuation of Kästrich in the form of book publications. The books introduce projects, individual artists or developments with a focus on tendencies that are little documented. 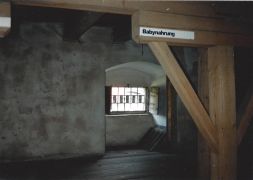