Ingo Kratisch was born in Nejdek (Czech Republic) in May 1945. He completed an apprenticeship as a mechanic in Rosenheim and then studied design at the State Academy for Workmanship and Fashion in West Berlin.

From 1969 to 1972 he studied at the German Film and Television Academy Berlin. His graduation film DIE WOLLANDS (1972), which he made in collaboration with Marianne Lüdcke, is in the tradition of "proletarian film". The film tells the story of a welder who is involved in the labor dispute despite personal disadvantages. The Wollands was awarded the German Film Critics' Prize in 1973.

After completing his studies, Kratik, together with Marianne Lüdcke, made three more films dealing with the world of work: LOHN UND LIEBE (1973/74), FAMILIENGLÜCK (1975) and DIE TANNERHÜTTE (1976). Later, several experimental feature films and documentaries were created in collaboration with Jutta Sartory, including HENRY ANGST (1979/80), THE INSULATION OF AMERICA IN WINTER 1977/78 (1980/81), LOGIK DES GEFEUSS (1981/82) and DIESSEITS UND JENSEITS (1983). 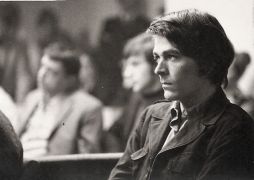