Peephole (for J. K.)
Installation for the Granary
Plasy Monastery 1994

Peephole (for J. K.)  "is part of a larger series of installations in both interior and landscape, dated between the 80s and 90s, where suspended glass plates were used. Unique is Ambrůz's technology of making the large shapes and plates of window glass "levitate" on ropes, all by using very simple tools and materials to get an effect of mirroring the space and day light on the sculpture's surface.
Materials: 50 glass plates, rope, iron hooks, light, space."
Jan Ambrůz, 2018
Dimensions: 180×180×1400cm


Jan Ambrůz (born 1956) graduated from the Academy of Arts, Architecture and Design in 1984. Since the 1980s, Ambrůz’s work has developed in two directions: one is focused on delicate constructions and installations made of sheets of glass, the other on work with wood. In both these modes, the artist reshapes in an innovative way the legacy of geometrical art and minimalism, as well as land art in certain works, since in Ambrůz’s work the placing of an object within a natural landscape plays an important role.

Many objects are created purely for a given place and time. After an installation comes to an end, such a work subsequently only exists in the form of photographic documentation. Since 1988, Ambrůz has created a large series of glass constructions, large objects made of sheets of glass, laid on the ground or on an unstable wooden base, or hung feely in space using string (Infinity, 1987, Below One Another, 1987, Trio, 1987). The composition using sheets of glass gives rise to geometric grids in which one geometric motif is repeated. Basically, this involves the principle of multiplication as we know it from minimalism. However, Ambrůz adds an emotional charge by monitoring the relationship of the material (glass), light and air. These delicate, ephemeral and subtle, while at the same time monumental, glass constructions levitate in space and force us to ask whether their apparent instability can hold its own in the face of the laws of gravity. These sculptures accentuate the relationship between instability and stability and between mass and the denial thereof.

In the years following, Ambrůz did not completely give up working with glass. For instance, On Cones I and II (2009), in which sheets of glass are spread out in a forest, demonstrates his love of landscape projects.

A characteristic feature of Ambrůz’s work is a special mode of poetics which arises from the dialogue of object and environment, in which the surrounding space becomes part of the installations. The language of geometry pervades the artist’s work, though this is a different language from that which we are used to from previous geometric and minimalist art. Strict successions, cold technical processing and a clear construction are always violated and “softened” in Ambrůz’s work, at one moment by the instability of the glass installations, at another by the primitivism of the surface of wooden or iron objects. An unsettling tension thus creeps into the artist’s sculptures, testimony to the transience and temporariness of things and to the paradox of life itself. 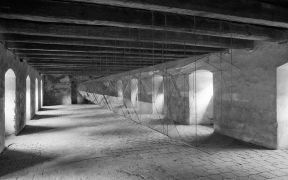 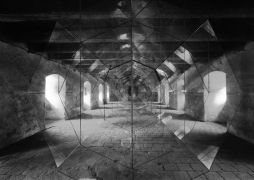 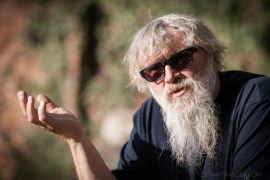