Fourteen days before and after the equinox, I dedicated myself to working in a small attic room; to its rediscovery, repair, and restoration to its original state, giving it a new set of qualities. This room is in the central section of the granary above the St. Wenceslaus and Mary Magdalene Chapel. In the course of the work, I gave much to this room (and to myself), but also received several important personal gifts.

Jan Svoboda’s contribution to the symposium consisted of a careful treatment of the little room in the granary attic. Svoboda cleaned the floor of the pigeon droppings, treated the window niches with an original technology (stretching and smoothing ? with leather gloves) and treated the original wooden window slats with a mixture of beeswax, resin and pigment. The sunlight that passed through the niches into the room was reflected through the white niches and changed color so that, during the day, the atmosphere of the space was changing. Svoboda also attached a net over the windows to keep out the pigeons and treated the wooden planks of the baroque door with beeswax. Beewax could be smelled during summertime for several years thereafter in the center of the barn.

Jan Svoboda participated in several Hermit symposia, and since 1995 has regularly organized art workshops in the Bechyně Monastery. (MV 2017)

Jan Svoboda (1955) studied Czech Language and Art Education at the Pedagogical Faculty of Charles University in Prague (1974–1978). From 1987-1995, he worked as an assistant professor at the Department of Art in the Faculty of Education of the Charles University in Prague. Since 1995 he has been working as a director of the Václav Pichl Primary Art School in Bechyně. In 1995 Svoboda founded the civic association Klášter at the Art School in Bechyně, which became a founding member of the international organization E-SPACE. Since 1999, he has designed and participated in exhibitions and programs for children for various exhibitions (Prague Quadrennial, Ten Centuries of Architecture, The Story of Prague Castle, etc.) 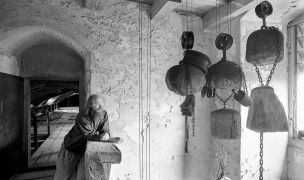 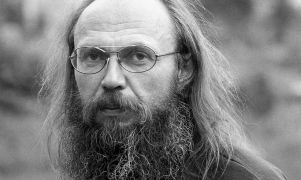