Information about the list of invited artists from the Czech Republic motivated my decision to participate in the project. All three of them are able to react to genius loci – the spirit of the place. Their abilitty to search for situations that make it possible to confront contemporary art strategies with traces of historical memory (regardless of whether these historic sediments are part of a work of art, architecture, or living nature) was one of the determining criteria of my selection.

I approached Laco Černý, with whom I had been cooperating for several years, and Emöke Vargová, who had attracted me with her minimalistic transparent objects made from casted paraffin. A propos: minimalism played an important role in my choice. Of course, I do not mean minimalism as a movement, but rather minimalism as a symptom of a certain philosophy. Both artists address the artists' creativity and, in any case, they do not suffer from the "Pygmalion syndrome". The objects and installations they create are virtually only media of visualizing those art qualities that are scattered all over the world. One of Emöke Vargovás's projects for Plasy is based on the working of real light (Light and Dusk), and Laco Čarný is considering to manipulate natural light as a purely artistic matter (Apparatus for Light Distillation).

The monastery in Plasy is one of those magical places where there is a peculiar link to alchemical change. It is a place where the so-called second nature (here represented by the monastery architecture) becomes a part of the living nature. This transformation process does not concern me as a specter of Romanticism, but as reference to the complexity of the world we are experiencing immediately. Perhaps it is legitimate that this symbolic fulfillment of the "desire for unity" can only take place through destruction (the current desolate state of architecture of the convent), at a place where human energy (including creative potency) slowed down. The genius loci of the Plasy monastery is very strong and will be a great challenge for works of contemporary art. I am sincerely curious about what each artist will do, in order not to be aggressive towards this environment and, at the same time, not to be overwhelmed by it.


Mgr. Jana Geržová (1951) is a Slovakian art historian, critic and curator who graduated at the department of History of Fine Art at the Faculty of Philosophy at the Comenius University in Bratislava (1975). She is co-founder of Profil, the contemporary art magazine (1990), editor-in-chief of Profil (from 1992 until today), the main curator of Synagogue – Center for Contemporary Art, Gallery of Jan Koniarek, Trnava (1994–2000), research fellow at the Institute of Art and Science, Academy of Fine Arts and Design in Bratislava (2000 – 2012), president of the Slovak Section of AICA (2000–2008). She specialises on various aspects of the art of the second half of the 20th century, in particular on the history of conceptual tendencies, site-specific installation, feminist art, postmodern identity, citation, appropriation and post-production strategies, as well as the phenomenon of the renewal, return or rebirth of painting at the Turn of the Millennium. She is the author of several books, many studies and essays: Rozhovory o maľbe. Pohľad na slovenskú maľbu prostredníctvom orálnej histórie (2009), Slovenské výtvarné umenie 1939 – 1989 z pohľadu dobovej literatúry (2006), the first monograph of Otis Laubert (2001) a Daniel Fischer (2016, co-author). In the 90s she initiated the first terminology dictionary Kľúčové termíny výtvarného umenia druhej polovice 20. storočia. Gramatická a sémantická charakteristika (in cooperation with linguist I. Hrubaničová, 1998) and the dictionary of contemporary art Od abstraktného umenia k virtuálnej realite (in cooperation with J. Mojžiš, 1999). For the publication the History of Slovak Fine Arts – 20th Century (ed. Z. Rusinová, Slovac National Gallery, 2000) she wrote the studies Conceptual Art and Citation; Interpretation and Approach in the Media Analysis. Her study Art and the Question of Gender in Slovak Art written for the British feminist magazine n.pradoxa (2001) was included in the publication Gender Check and Reader (ed., B. Pejić, 2010). 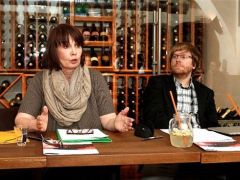