"Mini-Fan Music grew out of the idea of combining acoustic and visual phenomena.The staged event does without a stage, allowing the entire space to be experienced as a mobile concert hall in which the audience is free to move about.
Ordinary pocket fans standing on the ground are brought into contact with various string instruments.  the instrument strings are gently but continuously struck by the propellers, causing them to vibrate. Because the propellers' strike rate is higher than the strings' oscillation frequency, these free-running strings produce similarly rich overtones as well as a full and loud range of sounds quite unlike the usual percussive or bowed sounds. Different, complex and static sound structures develop throughout the entire space as a result of the numerous guitars, violins, banjos, etc. distributed across the hall.
Depending on the capacity of the batteries, the concert can last up to three to five hours. After the one-hour-long decrescendo that usually starts about two hours after the concert begins, momentary polyrhythmic structures occur at the piano-pianissimo dynamic level."

Jens Brand (born 1968 in Dortmund) is a visual artists and curator who lives and works in Berlin, Germany. Brand studied visual arts in Münster, Germany. He works as a composer, musician, visual & audiovisual artist and organizer (Dortmund). He has presented, performed, and exhibited in Germany, Austria, the Netherlands, Belgium, Italy, Denmark, Finland, Slovakia, the Czech Republic, Hungary, Poland, Cuba, Japan, and the U.S.A. Most of his works are developed specifically for the location in which they are presented. A tendency of his work is for any given piece to be both very simple and meaningless, or else a very complicated mess that involves everything and everyone. His pieces can appear as concerts, performances or installations. Recent works have ended up being mixtures of these genres, developed as logical and absurd games between the audience and the artist. His experimentation with everything can be considered art, and is not supposed to establish a belief or truth, but rather try to offer a fruitful substrate for research, communication, and progressive failure. Pieces used in the collaboration with Sam Ashley, (’Motors and Styrofoam’), with Waldo Riedl (’Mini-Fan Music'), ’New Methods for Circular Breathing: #1,’ ’Piano’ or ’Ratchets’ appear as short-duration installations that evoke something Jens considers to be "electronic music without speakers."
Jens performed with Sam Ashely at NoD in Prague and exhibited his G-pod sound installation at Školská 28 gallery in 2004. 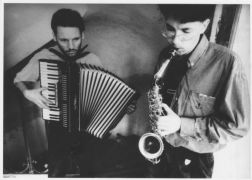