Apparatus for the Distillation of Light
Installation for the Granary
Fungus: inquiry of the place, 1994
Plasy Monastery

Ladislav Čarný, similarly to Vladimír Vimr and Uschi Kütz, placed his installation in the underground space of the granary, in one of the cellars beneath the Gothic Chapel of St. Mary Magdalen. The baroque granary are at the site of the former Premsela residence from the second half of the 13th century, and has two floors: the Chapel of St. Wenceslas and the St. Mary Magdalene Chapel. In 1683-1686, Jean Baptiste Mathey added two wings of massive baroque granaries with a tower where the original clock machine was placed in 1686.

A narrow beam of light coming from a small window through to the darkness used Čarný to suggest the alchemystic system of distillation tubes and laboratory glass flasks. The green fluorescent fluid in one of the pots symbolizing distilled light.

Prof. Ladislav Čarný (b. 1949, Žilina) is an established Slovakian artist and educator, representative of conceptual and generative art. In 1992 he started teaching at the Academy of Fine Arts in Bratislava at the Department of Art Theory and History. His activities reach from visual arts through art theory, organizing exhibitions, symposiums, workshops on pedagogy and publishing books. He lives in Bratislava. 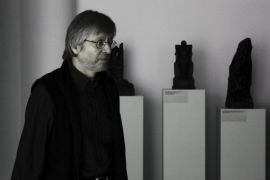