Reconstruction of Crime was initiated by the group Led Art in 1994, during the destructive war in the former Yugoslavia. The project is based on the idea that increasing evil has to be opposed with all available means, and artists will oppose evil with art. The procedure was “borrowed” from police practice when, after a incident with a fatality, the contour of the body of the victim is drawn with a chalk, thus creating an “incident drawing.” It has been going on since 1994.

Urban Spells – Phew, we are all safe: incident prints, photography against spells, expeditions to landfills, public hair-cutting, creating flags … are all used as elements of art magic with which “consumers”/viewers are freed from fear and given back a hope in salvation.

It will turn out that artistic intervention in the field of current politics, society and culture has a great potential. That is why through transformations and interweaving Reconstruction of Crime has become part of almost all the projects by Led Art and Art Klinika to date.

LED ART (ICE ART). In an extraordinary socio-political turmoil that shoved Yugoslavia into a war and complete international isolation during the 1990s, activity in culture and the arts was one possible way to survive and not be drowned in cataclysmic reality. Under those circumstances, in the year 1993 painter N. Dzafo founded the LED ART (ICE ART) group. All the realized projects of LED ART (including the ones only sketched) bear the epithet of engaged art that intensely resisted the regime of Slobodan Milosevic. LED ART has gathered more than 300 individuals in close to fifty projects during the ten-year activity period: artists, sociologists, art historians, journalists, scientists. Thus, the group is the mirror of the arts and the society of the final decade of the millenium.

The artistic activity of LED ART is summed up in Serbian language book “LED ART – documents of time 1993-2003”: published by Multimedia center “Led art”, Novi Sad 2004. The book offers, together with the activities of the group, the chronology of social and political events on the territory of the former Yugoslavia, thereby supporting the attempts of Led Art “not to forget and not to remain silent.”

Open Day: Ice Celebration: Exhibition by the Residents and Festival 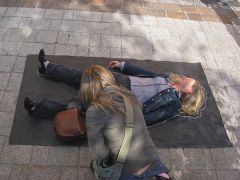