"Plasy was a beautiful golden fairy tale dreamtime for me. Art was everywhere all around us, at all times, in and around the monastery.... being created, viewed, discussed, performed, explored, dissected, experienced and documented. Even in sleep, my dreams became works of art...more vivid and colourful and powerful than I'd ever known. Often I wrote down my dreams upon awakening. My dreamtime stories of Plasy have been told and retold hundreds of times to hundreds of primary school children here in Australia. The children were always asking me to describe the magic of the monastery with as much detail as I can recall: the huge old stones, the secret underground labyrinth with central stone pools of water which kept us from losing our way, the giant keys which would open mystical wonderful worlds, like the Chapel of St Bernard with its beautiful grand piano and high domed frescoed ceiling transforming my rusty piano scales into a magical soundscape of a thousand swirling voices...the marble stairways where I would watch out for the little crying boy or the white horse ghosts that Milos told me had been sighted more than once...the monastery's bell-tower clock room, the bell chime mechanics whirring into motion on the hour....and the round table room where artists would project their artworks and stories from around the world. I loved to video the artists at work... Rosa meta-moving through time and light and space... Alison sitting in her white dust-coat counting grains of sand under a microscope waiting for the human population of the world to reach six billion...Michael's weird and wonderful dragon created and paraded with local school children.... Sovan's bizarre and thought-provoking toilet opera, and so much more. A daily highlight was to collect giant edible mushrooms with Martina in the surrounding forest .....and together with Abdelali and anyone else willing to lend their cuisine tricks, we'd cook up the evening feast. Plasy was an enchanted playground space where beautiful, wild, surreal art happenings were the natural order. I felt supremely privileged to be there, playing with people who love and live art as I do."
Mars Drum, 2019

Mars Drum is a visual artist who grew up on a farm in Banyena, Wimmera Victoria. She left home at eighteen to spend the next few decades "living the artful life", which included six years of art residencies and travel in Europe and Asia, obsessive video documentation of Melbourne’s fringe arts and counter-cultural happenings during the 90s, and even donning the burqa for a year as support for Muslim women following the 9/11 attacks in 2001. Drum’s “The True History of Ned Kelly and Burka Woman” is an extensive ongoing series of paintings, and photo-stories which has been exhibited, short-listed in national art prizes, and reviewed positively both nationally and internationally since 2008. Drum is currently working on two short films, and also works as a music therapist in Aged Care environments. 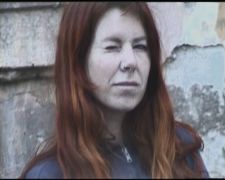 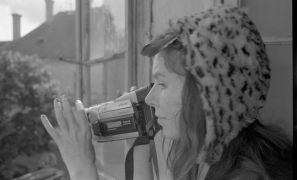 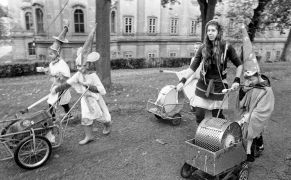 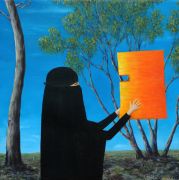 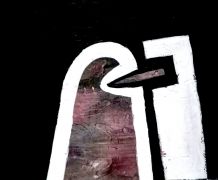