This article was written by the social geographers, Alois Hynek and Tomáš Hendrych who were working at the Department of Geography of the Faculty of Natural Sciences and Pedagogy of the Technical University of Liberec in 2006. It was presented in České Budějovice at a conference of the Czech Geographical Society in 2006 and later appeared in the Anthology of the Czech Geographical Society, vol. 113, no. 2, 2008. The article is available only in Czech. Bellow see a summary in English.

It is one of the few examples of a local systematic approach to environmental aspects of acoustics. The text was, in a slightly edited form, published in the Proceedings of the Czech Geographical Society in 2008. Here we present a version provided by one of the co-authors.

In personal correspondence with the editor, Mr. Hynek recalled that the article, after its publication, aroused a certain amount of resentment among geographers. In the conclusion, the authors summarize their research this way:

“We consider the acoustic typology of the landscape (Chapter 1.3) presented here to be the first attempt of this nature in Czech geography, though we are aware of a number of simplifications, we consider anthropophonic noise to be a very serious externality that needs to be calculated economically”.

From another perspective, in 2009. the psychotherepost Doc. Mgr. Tomáš Řiháček, Ph.D., working at the Faculty of Social Studies MU, published the book The Sound Environment of the City and its Influence on Experience. (Brno: Masaryk University), in addition to several other studies devoted especially to listening, concentration and its overall influence. In his research, Řiháček refers to the concept of the sonosphere (his proposed Czech translation of Schafer’s term soundscape). Hynek and Hendrych do not quote the work of Raymond Murray Schafer as their inspiration, but instead creatively elaborate on his taxonomy of sound sources such as geophony, biophony, or anthropophony. I consider the reference to contemporary music to be original in their model of the typology of soundscapes.

Acoustics play an important role in the pleasing or displeasing perceptions of the landscape when it is interpreted as a soundscape. It is spatially differentiated with respect to sound level and sound producing or absorbing tracts of land. Some tracts can amplify sound level while others may cause multiple echo effects. Nevertheless, there still exist nearly silent tracts of land. We can identify various soundscapes using the prevailing geophony from inorganic sources — rocks, water, air and biophony produced by animals and plants. However, the main sound pollution in the landscape comes from human activities, and only rarely is it not pollution, but silence or even a healing sound.

This is a reason for the typology we use. Those where natural acoustic sources dominate are called “art-rock” soundscapes, quite different from noisy soundscapes, which we call “punk rock”. There are also some transitional ones inbetween called “hard rock“ soundscapes. In any case, soundscapes should be respected in cultural landscape classifications, especially in the new Czech concept of landscape character, which is not only a visual heritage, but above all sensual. And hearing does not have less relevance than vision. For our typology, we have chosen two classification criteria: anthropic noise time cycle and anthropic noise intensity. For the time cycle we propose four categories: absent, ephemeral, intermittent and permanent. For intensity, we propose five categories: zero, low, medium, high and very high. Acoustic situations in the landscapre are mentioned and their main soundscape acoustical types can be characterized as:

a) Acoustically specific: anthropic noise is absent, its intensity is zero;

a) Rural: anthropic noise is intermittent, of medium intensity;

b) Suburban: anthropic noise is permanent, of medium intensity.

a) Anthrophonic military: anthropic noise is intermittent, of high intensity;

b) Anthropophonic mining: anthropic noise is permanent, of high intensity;

Sounds are a very important part of our environment. Acoustic assessments should be an integral part of environmental assessments, nature protection and urban projects. The anthropic noise is for us a relevant externality which must be taken into consideration in economic decision making. The environmental assessments are not limited only to visuality and acoustics, since landscape is also tactile — we can perceive tastes, smells and odors. This paper wants to contribute to holistic environmental approaches. 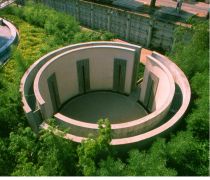