Complicity at the Edge of Extinction

Though many lamps are lit throughout the house, Those with no eyes to see remain in darkness.

Instead of thinking of each discipline as a mode of knowledge, we might think of each as offering the difference between a mystery novel and a science fiction.

But science fiction is the realism of our time. The sense that we are all now stuck in a science-fiction novel that we’re writing together — that’s another sign of the emerging structure of feeling.

Space is not Outside, but inside the organism (just as on the other side, the Outside is already inside).

Life = non-material substrate distributed within the social sphere.
On March 12, 2020, a global pandemic was announced.

Gaurav Thakur: Only medical and grocery shops are open, but the vegetable market was crowded and grocery shops have a large amount of customers after the announcement of the 21 days long lockdown. People are afraid of the shortage of food supply and shopkeepers are increasing prices. Because of fear, people are paying more without a second thought. Since the 22nd of March, the quality of air has changed drastically due to reduced traffic. Petrol pumps are open, but very few people go there. 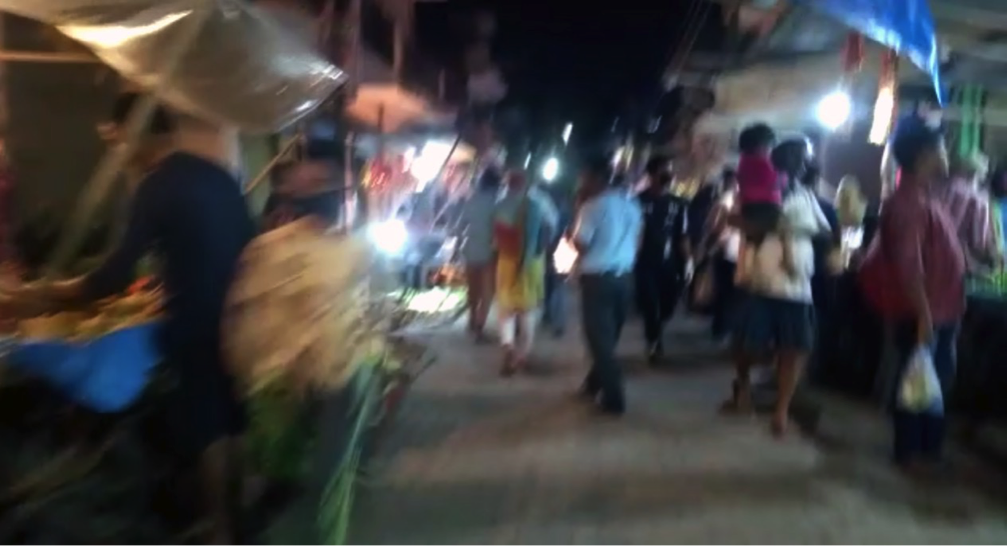 Our age is the age of human accident.
How to inhabit a damaged Earth?

Extremophilic bacteria are those bacteria which not only survive but thrive in physically and geochemically extreme conditions which would otherwise damage most of the life on Earth. These microbes colonize almost every single millimeter of the Earth under circumstances of extreme radiation, heat, pressure or an absence of oxygen. Philosopher Eugene Thacker describes these microbes as ideal objects through which we are able to listen in on the very idea of life. These microbes are unusual because they live without light, but mostly because their living without light falls outside of the current epistemological qualifications which condition the human ability to identify what is life and to understand it. Ignoring the very ability to exactly define what is living and what is not becomes a key problem in the project of the decentralization of the human (from thinking). These microbes dwell deep inside the Earth and are dependent on it, much like we depend on the Earth.

Priyanshi Gupta: I was in Kalindi Kunj for festival, we have to go near the Yamuna river. There was a lot of foam floating in water. People said that there is usually foam created by chemicals in the river when water is released from a dam. 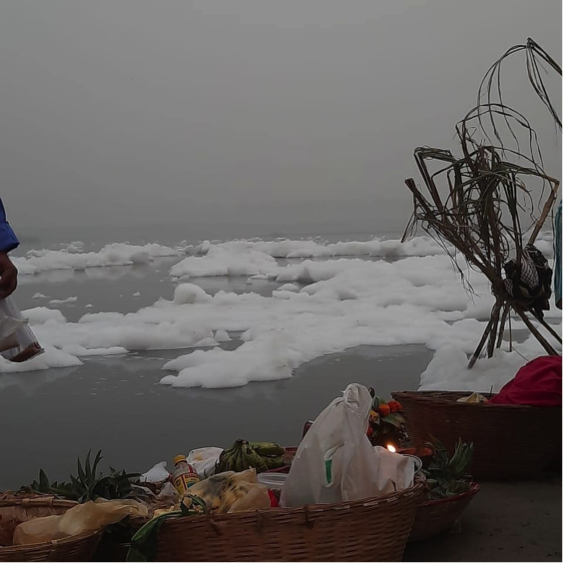 Earth is neither nature nor deity. Earth is a new form of political power which we must interrogate time and time again. Human does not mean people, but rather a unique species of being, created by enlightenment thought and set in motion by modernization and state regulation and other things. We can say that this human has made a mess in the contemporary world. The contemporary world is thus a product of this species. Unity and peace will not be brought by neither nature nor the gods, but the people of the Earth can become the terrestrial craftsmen of peace.

The fix-it people however constitute a big problem – these are the people who say that they have a plan. These people are truly failing and we must face up to their destructive decisions every day. For they believe their own divinely secular story about technological fixes, meaning they believe in (technological) perfection which is yet to come. These people have brought about many scandals and are the most dangerous of all the forces of extinction.

[Techno-optimism is much worse than techno-pessimism]

Imagine an integrated system connecting computer users or the savage retreat of migrants across the border. Or capital investments being siphoned off to various offshore locales. These world flows are not only mutually interconnected, they also constitute a shift of channels and a re-mapping of geography.

Imagine that the necro-political boundary is shifting from the shores of Greece towards the doors of our home. Lesbos now begins at our doorstep. The border now coils around us and presses us closer to our own bodies.

Imagine the worms, how they search out soil rich in nutrients. Fields, forests in which they are able to survive. They survive only when they encounter certain conditions.

The Earth is a spatial phenomenon, an autopoietic sphere which has fashioned its own stability and instability. Whether we heal ourselves or heal the Earth makes no difference. Healing our minds and our bodies has always been, and continues to be, connected with healing the Earth. Many medicines exist, but most of them give only temporary respite from suffering. The Earth finds itself in danger and all the species which live on it find themselves in equal danger.

Imagine eating a piece of bread. If we eat the bread knowing what we are doing, we will see the Earth in that piece of bread, the sky, the rain, people… Bread could not exist all of its own.

Imagine what it would be like to find yourself in a wholly silent forest, no sounds are heard. It would be a dead forest, a forest museum or a forest of the living dead. Either way, we would find ourselves on the threshold between life and death.

Bhupendra Kumar: This evening, there was a dust storm on my way home. It irritated my throat and eyes. 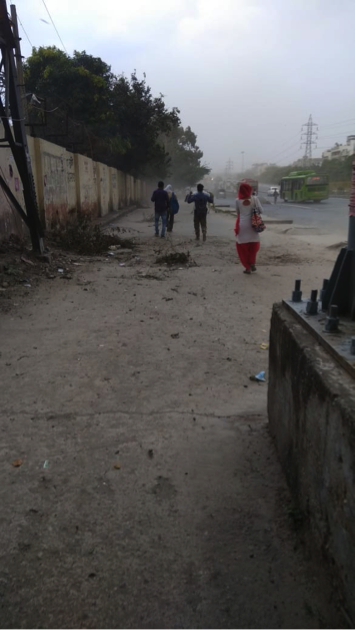 Pryianshi Gupta: Today, a man with the smoke machine came to repel mosquitoes and other insects. It works, but it is very difficult to breathe due to the smoke. 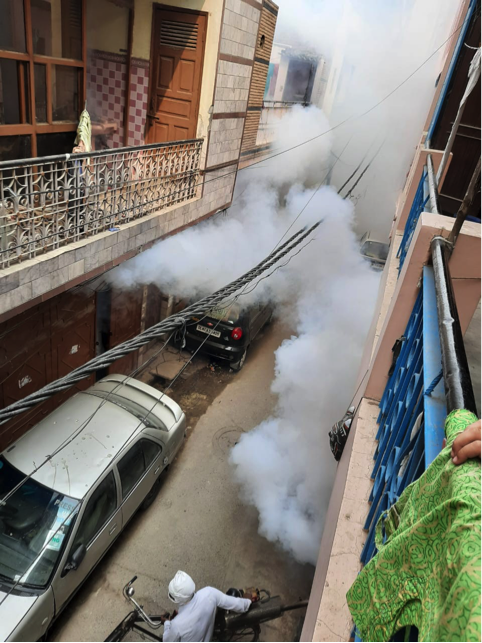 Sumanshu Rao: The situation is becoming unmanageable. Wind is bringing a massive blanket of smog, reports say that the rapid increasement of pollution happened because farmers are burning stubbles in neighbouring states. I saw children coughing and the number of patients in hospitals is raising as well. 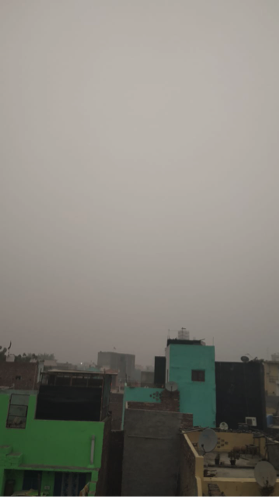 This new type of relationships also requires a change in imagination. If we really take something seriously, it means that we are at that point allowed to propose new possible worlds and inhabit them with diverse types of practices and skills. This opens the possibility of thinking and working differently. Different collocations help us to re-imagine our present and its problems. These problems allow for cooperation and further examination.

[Pollution Diaries]1 is something like a method for tracking, a platform for following the subtle shifts in the every-day, collaborative story-writing woven into each one of us, although born out of a single place. These stories allow us to touch those entities which oftentimes do not have human form, but whose qualities are undoubtedly affirmed and accelerated through human activity. [Pollution Diaries] is only one field which shows us what lies in store for us. We can enter into it any time. It is always open. But moving in this zone is not as easy as might seem at first sight. What is expected of you during your visit is that you will, under all circumstances, remain in the same space with those who are dear to you, but also with those who are distant, but also those who might seem as enemies. This means that such a visit can re-calibrate your ability to perceive and react. This is interesting, challenging, but also very risky.

We should not relinquish our problems, neither during our epoch, nor at any other time. We should not block problems in the hope for a safer, more organized world. Our task is rather to stir up trouble. To evoke strong reactions to any destructive events. Only this can extend the time allotted to us. Only this will allow us to become truly present. We don’t need anything which might help us forget. Our ethical imperative should be to give inhuman life the space to compose without humanity, while humanity travels to worlds other than Earth. It might come to pass that something which we may have considered to be life will return to the surface of the Earth without us necessarily bearing witness to it. Monsters in the best sense of the word.

[Life is an untried and empty principle]

On 8 April, 2020 around 10.30 PM. Shweta Kapoor, a student of the first year at the university of New Delhi is having dinner with her family. The muffled sound of her cell phone is heard form the neighboring room. Shweta looks over at her mother – mother silently nods her approval. Shweta wipes her hands and leaves. She sits down in the corner of the room and picks up the telephone. An image of a night street fades away on her screen. The room is again dark. Shweta unlocks her phone to look at the photograph which lights up her face. She is smiling. Under the image, there is a short text message from her friends: […] People are now going outside, saying: “Let’s go out to breathe the fresh air.”

This text and these photographs form part of the publication [Pollution Diaries].

The author and editor of the publication is Veronika Resslová, a Czech language teacher at the University of Delhi. The book [Pollution Diaries] will be published in the second half of 2020.