Plasy Statement
"I came to Plasy to do a series of experiments, seeking a way to bridge the gap between photography and installation.  The unrealized question was how to elicit the somatic response that immersive installation art can generate using a medium typically used representationally. Since my work is site-specific, I turned to the baroque abbey for context.  I took a series of photographs of burning wooden grids with their cross-like iconography and subsequently printed these on treated paper from Velke Losiny, a town known for its hand-made paper and baroque era witch trials—the latter roughly contemporaneous with the Baroque reconstruction of the Plasy monastery.  The photographs were then mounted—stained glass window style—in the windows of the granary.  In retrospect, the work was a transition for me, albeit an important one, to large-scale photo-based installation work. Michael Krondl, 2019

Michael Krondl is a Czech-born (Prague 1960) New York–based installation artist. Over the last dozen years or so he has worked with very large, digitally manipulated photographs that are installed in such a way as to transform space. He has exhibited in galleries, museums, and public spaces in the United States, Canada, Netherlands, Germany, and the Czech Republic. Recently, he has begun to experiment with video. In 2003 Krondl - as a memorial for the first anniversary of the floods that devastated Prague in the summer of 2002 created the site specific installation Waterwalk. He covered the floor of the former Palmovka Synagogue in Prague with a large photograph of the surface of the Vltava river, and visitors were invited to walk across the “flooded” interior of the building. The Interactive sound was designed by Tomáš Hrůza. 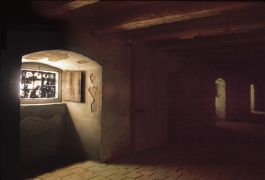