"After the summer's yield, Lord, it is time to let your shadow lengthen on the sundials and in the pastures let the rough winds fly."
From Herbstag, Rainer Maria Rilke

"For years I have been investigating the purity and the freedom in the relation between sculpture and sound. I look for an elementary mechanism that produce elementary noises to see and to hear what is necessary for achieving a miracle. The fall is an ultimate Baroque action and the stones from the river are elementary objects from Plasy. The combination of the very old floor of the granary and my “fall machines” gave this little mechanism its miracle."
Nico Parlevliet, 1993, Plasy

Nico Parleviet is a Dutch sound artist, who graduated in photography from the Fotovakschool in The Hague (1969-1974), and in 1975 he went to study at the Academy Minerva in Groningen. After his studies, he was working as a designer. His work counts among the so-called Interactive Arts. Change and sensual perception are key concepts, and are the source of the audience's fascination. In addition to movement and for a long time, his research area was sound. He found it is not just about the sound itself, but also about the process of movement from where the sound comes from. In recent years, he has been working hard with video and 16mm film. Since 1997, he has been living and working in Dordrecht. He also worked as a consultant at the Rotterdam Art Center for Public Art. 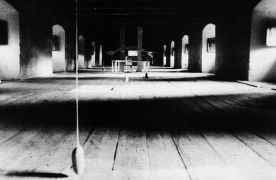 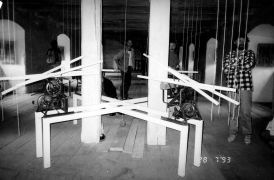 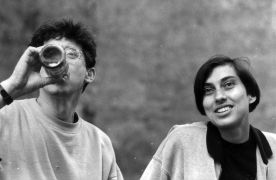