"An installation of approximately ninety metal (tin) plaques, each one inscribed with a word, in four languages: Polish, Russian Czech and Serbo-Croat. Each word a prayer, a warning or a lament. Each word had been soldered, written onto the metal. Words chosen as laments include "postrádati“ – to lack or miss in Czech. The same word means suffer in Serbo-Croat and Russian Words chosen as prayers include "rozuměti“ – to understand, "blahoslaviti“ – to bless, and as warnings : "stříci se“ – to beware, "odsouditi" – to condemn, "poslouchati“ – to listen.
Etymologically, the same word in each language often has different meanings. Sometimes the meaning has a subtle difference between two or three of the languages, as "district“ in Russian becomes "vlast“ – fatherland in Czech, but it transform to "power“ , "rule“ – "authority“ and "control“ in Serbo-Croat. Do nations' histories and their psyches affect their languages? Although from the same Slavic root, these words have subtle differences of meaning, often in a nationalistic context. Often we use the same language, the same words, however the intention behind the words is sometimes very different.
**
The Transparent Messenger Exhibition in 1993 in Plasy Monastery, near Plzeň, Czech Republic, was a period of the splitting apart of the Republic from Slovakia.
Formerly a Cistercian Monastery, I wanted to reflect both the period of change and the nature of the building which had been a place of prayer. I made approximately ninety pieces cut out of tin and soldered with words, prayers lamentations, warnings in Czech, Russian (their former oppressors), Polish (my second language), and Serbo-Croat, (at that point war was raging in the Balkans due to the break up of Yugoslavia), and I felt it was appropriate to include Serbo-Croat in the texts. It is probably also worth mentioning that the Cistercian Order renounced everything except writing well.
Some examples of the words translated here into English included:  Listen, Learn, Blessed, Peace / Absence of War, Truce, to Open Memory, to Understand, Candle,to Suffer, to Transform, Ruins, Ominous, to Untie."

Lorraine Kordecki studied at the University of Reading, Department of Fine Art, 1991 - 1995. She lives and works just outside of London. 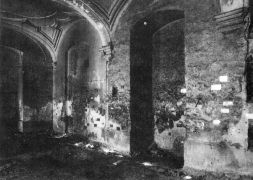 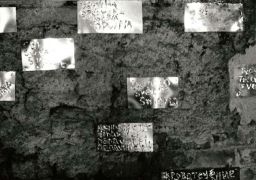 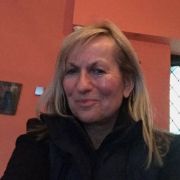