They said to one another: Come, let us make bricks and bake them hard. Come, let's build a city and a tower with its top in the heavens, and make a name for ourselves lest we shall be dispersed all over the Earth. Then the Lord came down to see the city and the tower which mortal men had built, and said: "Here they are, the people with a single language, and now they have started this, nothing they have a mind to do will be beyond their reach. Come, let's go down there and confuse their language, so that they will not understand each other.
Genesis, Book 11

Igor Hlavinka (1959, Prague) is a visual artist who lives and works in Prague. Between 1979 and 1982 he studied stage design at the Theater Academy of Performing Arts in Prague. In 1986, he graduated from the Academy of Fine Arts in Prague. He was a member of the Tunel Art Group (1989-92) and since 1996 has been a member of the S.V.U. Manes. In his work, he works in landscape painting, drawings and figural painting on the themes of Holocaust, as well as in non-figural painting (Cycles of Characters, Chaos and Order, Strange Symmetry, Around the Middle).
In the 1990s, he participated in the Symposium of the Hermit Foundation at the Plasy monastery, where he created clay models of imaginary biomorphic structures. In 1997, he initiated and co-organized the international symposium "On the Beginning" in Plasy.
For several years, he has also been involved in restoring wall paintings, designing and realizing gardens. Since 2003, he has been modelling the imaginary heads from ceramic clay. Since 2007, he has been involved in painting the mountain landscape in the "Island of the Clouds" cycle. He has participated in many collective and authorial  exhibitions. He is represented in private and public collections. 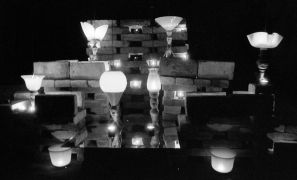 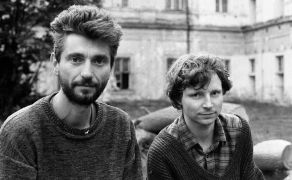 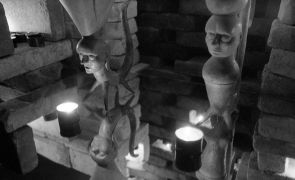