The evening  theater performance of Věra Říčařová and František Vítek in the dark lofts of the granary gave the Hermit symposium a nostalgic and mysteriously grotesque dimension. A public comprised of all ages and backgrounds sat around a small portable stage. Under a pale spotlight were emerging pictures from distant days past: a wooden Primabalerina dancing between two mirrors, a ropewalker above the heads of the public, the interior of a huge wooden head where two figures were wrestling, a love story reflecting desire and death, Caspar's comical act with horse and a soft horror dance rpresented by tiny skeleton puppets. With the sound of the raindrops on the roof mixed the creaking of an ancient gramophone, a reel-to-reel recorder and the squeaking of the naked puppets' wooden joints.

The artist and puppeteer Věra Říčařová (born 1936) graduated from the ceramics school in Bechyně and was admitted to Academy of Performing Arts in Prague. The theater puppeteer František Vítek (1929) is trained as a wood carver, graduating in 1948. Over time, he became a stage technician and designer of puppets at the Radost theater in Brno. During the 1960s he got interested in creating his own puppet theater and was influenced by the traditional Czech wooden marionettes. His puppets are naked so that their anatomy remains visible.

Říčařová and Vítek met in the newly established East Bohemian Puppet Theater in Hradec Králové, today's DRAK Theater, and married in 1967. For their lifelong work, these prominent representatives of the Czech puppet theater gained a number of awards and toured internationally with DRAK and, since their depature in the 90s, as an artistic duo.

Piškanderdulá is an expedition for discovering the essence of puppet art.  They found the title of this performance written by a child's hand on a wall near thir house in Hradec Králové. The inscription apparently had no meaning but reflected one of the basic principles of their performance: the inspiration by children's creativity. It became a legend in the international scene of the puppet theater and in the avant-garde theater in general. 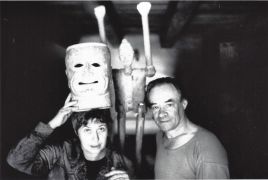