"Sound defines space more than visual elements do. When visual objects, graphic shapes or images are at a dead angle, their meaning disappears. They need a physical place to exist. In the case of virtual images, this physical space is a screen. The following passage explains Marshall McLuhan’s approach: 'Before Man knew scripture, he was living in 'the space of the ear.' The ear was then more important to him than the eye.' (Marshall McLuhan and Edmond Carpenter, The Ear and the Eye, 1967). The education of three thousand years led to a separation from sentiments and emotions, but the latest media technology recalls these original sentiments and emotions. Sound helps to construct the space which lies physically in front of one’s eyes, or the virtual space which spreads in the mind. Given that the acoustic space helps to restore one’s perceptions and emotions, re-visualizing and re-construction of this space in the visual sense (which uses sounds as a material), has become the main concept underlying my installation work.
The installation work at the cloister is based on the light which passes through it, and the physical material of the drawing which intercepts the light. The drawing features sign-like forms. It is the visualization of the time axis of the sound composition of Christophe Charles. The notation of sound proposes many kinds of forms according to personal and circumstantial (environmental) elements. Charles samples the sound of the place where the music is to be played. The concrete sounds appear as notation of the place where the work has been installed, that is as the shadow of the stones of the cloister’s corridor. A form which does not feature any color has a much lighter existence than a picture frame. It involves the air, the place, and the natural light. Staying and working in Plasy led to the development of a sense of air which exceeds simple visual expression. The temper of the installation is due to the particularity of the place where it happened. This work does not intend to separate the visual world and the acoustic world, nor to define a relation of superiority or inferiority between them. In insists on the importance of their unlimited coexistence."
Endo Ritsuko, 1997
"The Japanese went to Plasy with very defined ideas for their contributions, almost all of them using electric devices. When we went to buy the Sony amplifier I had requested, Miloš told me, looking at some video clips produced by Sony TV: 'This is the culture supported by Sony.' I answered that we need amplifiers to show them that it is possible to do something completely different with the same equipment. Endo Ritsuko made an installation in the Cloister with big pictures hung in front of the high windows of its ambit that caught the afternoon sun, and I made sound experiments over three days in order to record music which would fit the corridor’s reverberation. The monastery’s guard told me in German that it was a nice sound. I do not know if he was comparing it to the bass lines of the heavy metal rock that was audible from the upper floor, polluting the soundscape of the Cloister. Endo’s work would be imagined after he heard the sounds I chose to "fit" the architecture, to "face" the sun as much as the heavy metal bass lines, and thus to show that the loudspeaker does not need to only serve annoying rock music or government propaganda."
Christophe Charles, 1997

Christophe Charles was the initiator of the joint venture between the Center for Metamedia Plasy and the Gallery Surge in Tokio who curated the expedition of Japanes artists to Czech Republic.
Two CD players and four speakers (in four corners of the corridors) created a spatial sonic environment. The ambient installation was running during the opening hours for 14 days after the symposium ended.
(Christoph was as well one of the first artists who came to Plasy equipped with a laptop computer. I think it was the PowerBook 3400c - manufactured by Apple Computer in 1997 - then considered the swiftest laptop in the world. It used the PowerPC 603e processor running at speeds of up to 240 MHz, featuring  PCI architecture, EDO memory, a 64-bit wide, 40 MHz Internal bus. It was also the first PowerBook to feature a PC card slot capable of being used as a  zoomed video port and it provided the possiblity to edit audio recordings on-site). 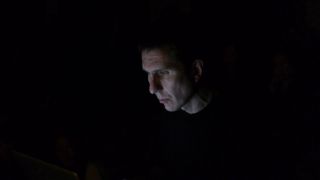