"This is a kind of 'invisible, touchless musical instrument' composed of a video camera, computer program and synthesizer. The performer (you) can control sounds of great variety and subtlety without touching anything. You find sounds unexpectedly somewhere in an empty space, and gradually you become aware of how to play them. It may be like strolling on an autumn evening listening to the songs of crickets… while you get this 'direct' audio experience, at the same time your figure becomes the visual aspect of the piece.
By the way, I am ready to offer this Macintosh program as part of some collaborative work. E-mail me at: icchna-x@dd.catv.ne.jp if you are interested..."
Chino Shuichi
"Chino arrived with a desktop Apple computer and spent his days in Plasy programming and taking walks. I don't know what kind of software he was working on, but he was able to track his movements by video camera and to trigger sounds from the library in real time by moving around the summer refectory.  The Nato.0+55+3d software by Netochka Nezvanova or Max/MSP by Miller Puckete was released only later, in 1999."
Miloš Vojtěchovský, 2018 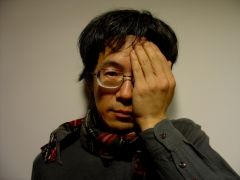