"Our irritation begins with communication that is not always accurate. 'My' intention is never transmitted properly, even to people who use the same language. Transmission will be much more accurate between those who speak a different language. After all, there is no general idea that we can share (it is rules of grammar, not meaning, that can be shared.) Then every misfortune and every happiness are called upon, and awakened by an imagined feeling of sharing. This reality is the starting point.
Various signs are written down by 'me.'  The feeling of time when this is present really passes. The feeling of the temperature of the time (history) when it accumulates. The smell of the air. Light. Darkness. Artificial light. Color. Shape.
The language became confused. The scenery piled up by personal eyes. (But the eyes are surely influenced by cultural measure.)
Confusion removes ordinary meaning. Then, the possibility of unknown, general ideas is suggested.
'I' exist as a crossing. 'I' exist as an origin of multiple dimensions of coordinates. The crossing (origin) of 'you' exists at the same time. There is no common point in each scale. There is no way to ascertain it.
We will be able to discern each other's coordinate space which does not appear intuitively to the eyes by recognizing this reality. We will be able to catch a glimpse of the actual meaning of various signs in the pile of the coordinating shaft which cannot be seen with the eyes.
'I' can expand the space further by accepting this fact sincerely."
Amano Toyohisa, 1997

Amano Toyohisa spoke very limited English and spent most of the days he was in Plasy in the dark souterrain space in the granary, where he was building his light installation. 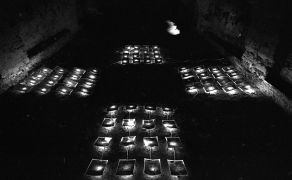 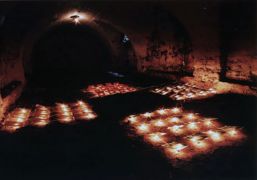