Dalibor Chatrný (1925 - 2012) was a Czech artist - painter, graphic designer, conceptual artist and pedagogue. From 1945 to 1949, he studied at the Faculty of Education of the Charles University in Prague, and in 1953 graduated from the Academy of Fine Arts in Prague (stuidos of Vladimír Sychra and Vladimír Silovský).

He was one of the most prominent and most productive representatives of Czech post-war abstract art. He approached the current manifestations of action and conceptual art in his time, and he considered the relation of art to immanent natural forces and landscapes. He was long involved with the semantic content of words and their possible visual forms. Apart from the artistic interpretations of photographs, he is the author of several audiovisual projects.

At first, he devoted his energies mainly to graphics and classical drawings. However, in the late 1950s, he began to experiment with new materials, new forms and new creative techniques which he then further developed actively until the end of his life. In addition, he also worked with the artistic representations of literary texts, artworks of photographs, as well as other works of art. 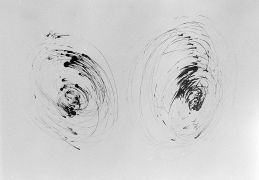 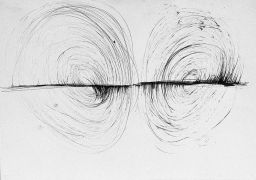