“The historical background and biological image of certain animals has given rise to myths, legend and folklore. I use animals as cultural metaphors or symbols in order to highlight human existence. Such use of animals also incorporates an ecological viewpoint that animals and mankind both share but one form of life. By observing and listening to these lifeforms, we may find answers to those perpetual questions such as ‘Who am I?’ or ‘Where did I come from and where am I going?’”
Goji Hamada
"TSUGARU is where I was born and brought up. Whenever I think or write about this region, I am assaulted by a strange uncertainty. I have many memories of TSUGARU, but most of them are not only personal but deeply and minutely private. My feelings for TSUGARU are, for example, like the sexual yearnings or frustrations that you will keep locked in your heart until the day you die. The place of my birth was alive with rabbits and carp, but it is also a place inhabited by headless chickens and pigs whose guts trail out from their bodies. To speak of TSUGARU, ultimately, is to speak of myself.
The panorama of TSUGARU forms a backdrop for the story of my inner search for who I am. The landscape seems alive with meaning, reaching out tentacles of memory all over my body like the neurons of my nervous system. It seems to be always there, trying to envelop and seize my present being whenever the opportunity affords."
Goji Hamada

Goji Hamada (born 1944 in Tsugaru) is a major figure in Japanese performance. He is continually creating new works and organizing events, including an annual festival and symposium in Kyoto. In 1992, he mounted a retrospective of performances and installations at the Perth Institute of Contemporary Art and has produced his performances in Berlin, Hamburg, Strasbourg, Paris, Barcelona and Nice.  He has collaborated with many Japanese and foreign performers and experimental artists across the globe, including Tetsuo Kogawa, Paul Panhuysen, etc.
Over the last 30 years, Goji Hamada has refined and elaborated a complex personal mythology in which his own body is a site for the exploration of time and space, life and death, and allegorical memory. The body is a double-sided mirror, reflecting both the world outside and its inner nature. Hamada’s props are imbued with rich symbolism and include simple materials (paper, alcohol, honey), basic media (video, Polaroid, radio), and often animals (hands, rabbits, snakes, tortoises, frogs and, on one occasion, a six-meter shark). 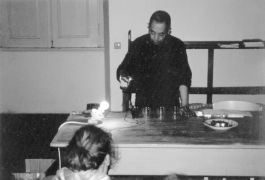