The installation on the second floor of the granary had a special genesis and narrative. The director of the Heritage Institute in Pilsen decided shortly before the opening of the exhibition to move to Plasy the so-called "transfer" - a Gothic wooden ceiling from the Zvíkov Romanesque castle, built on a rock above the Vltava River in 1234. They deposited the ceiling in the granary, although the space was officially rented for our exhibition. Pieces of wood were stacked and stocked on the floor in a quite chaotic and disturbing manner - at least for me - considering the context of the exhibition. The day before the opening and with the help of one assistant I desperately and intuitively rearranged the beams and planks so that the whole formed a shape and it would be possible to walk around it. It was only when it was finised and from a distance that I realized that the installation resembles the remains of a wreck, a sunken ship - a motif that appeared in a different form already in a plastic installation in the fountain pool in the yard of the prelature and in the intervention realized by Martin Zet in the stream of the Střela river.

Serendipity - "random" coincidence worked out again and the installation was set in the granary. It resonates wonderfully with the theme of the symposium and the exhibition "About the Beginning". The flood meant in the Bible the end of the world, and the ark of Noah floating on the rising waters symbolizes a new beginning for mankind and other fauna (except for the water animals, that is). 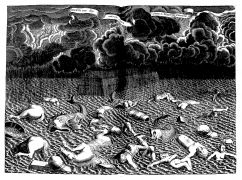