Apertura and Clausura
two paintings from the clausura, 1997

"I retreated into one of the rooms in the prelature (next to the entrance), and spent my entire time with painting. Being in the clausure for 2 weeks, I communicated very scarcely with the outside word. Actually, I managed to finish two painings: a large one and a small one."

Petr Kvíčala, 2018
(two paintings were exhibited in the granary)

"The concept of these paintings was to continue in the exploration of processuality. After painting the color layers of waves or lines, I intended to apply the same amount of layers on the canvas with white color until the canvas became almost white and thus returned to its "original state." This incredibly time-consuming process was successfully accomplished only in one case. Mostly, I remained only in the process - either by using a very transparent white acrylic paint or by stopping the process at the point when the color structure of the earlier layers was still somehow visible. In some paintings I applied white lines, and covered the canvas with more and more layers in a such way that a square grid was created. Further on, I continued only in the middle part and the edges of the canvas were still shining in colors. Sometimes I combined curved and straight lines in white layers. These canvases combined a certain stability of white nodes in the geometric grid, a crossing of lines resulting in the organic movement of wave-like structures."

Petr Kvíčala is a painter who has, since the mid-1980s, been focusing on ornament production. A basic element of his creative language can be found in ornamental lines, most often waves, broken lines or loops which he combines, reproduces, melds and layers in various ways. His inspiration for this abstract and radically reduced language was originally the landscape, through which Kvíčala, sometime around 1985, realized the autonomous expressive possibilities of geometrical linear elements rhythmically repeated on the image’s surface.

It is characteristic for the rise of the Czech post-modern sensibility that, at the turn of the 1980s/1990s, theorists associated Kvíčala’s painting with expression outside the avant-garde of modern art. They pointed out similarities between his works and ornamental paintings of folk architecture (the Waves /Vlny series, 1991). Likewise, they noted his work's relationship to abstract cave paintings from the Stone Age. Kvíčala indicates his inspiration from "low" culture by using elements from artistic crafts or from industrial manufacturing. This is reflected in the names of his paintings (Wallpaper / Tapety, 1987-88; Holiday Tablecloths for Weekdays / Sváteční ubrusy pro všední den 1992-94; Embroidering / Vyšívání, 1993). However, at the initial level, Kvíčala is not concerned about a post-modern game of aligning various languages, but rather he wishes to revive ornamentation as such. He values its visual effectiveness, its rational order and, last but not least, its potential for continuous variation. Kvíčala expressed great inventiveness and a taste for experimenting in his intentionally-abridged idiomatic dictionary. Among his works, we can find a procedural painting (60 Days of Red, Blue and Yellow / 60 dní červené, modré a žluté, 1996), or monochromatics and painted installations (Borders / Okraje, 1994).

Since the first quarter of the 1990s, he has also created painted objects, transferring themes for his paintings onto practical objects. He creates designs for clothing and has created a number of carpets of his own design. During the second half of the 1990s, he began working with architects. He has painted several interior paintings (murals). He also participates on concept development for specific spaces (wall mural in the Sports Hall in Litomyšl, 2001; decoration for the upholstery for a seating set in the dům U závoje in Prague, 2003; a ceiling mural for the Deutsche Bundesbank in Chemnitz, 2004; the Celebration Hall at Reduta in Brno, 2005). Kvíčala’s paintings, developed parallel to his other work of 2003-2005, express his interest in the optical effects of parallel lines, and in recent months he has turned to more classic forms of contemporary abstraction.

Near the Beginning: Symposium
Meanders, Paintings and the Forest: On the Idea of the First Painting 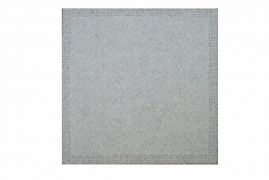 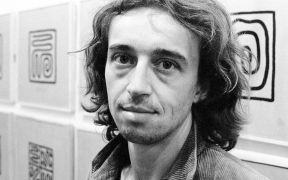 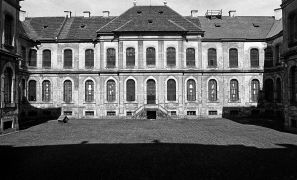 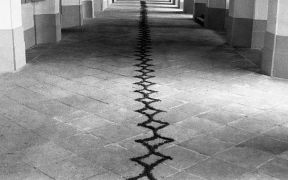