Meanders, Paintings and the Forest

On the Idea of the First Painting
by Miloš Vojtěchovský

1. To exhibit a picture in a gallery or museum is a fairly fraught endeavor, neither pleasant nor a matter of course. The museum was established to safeguard objects, most of which had been separated from their original owners; the gallery is a site of the marketplace. However, the very first pictures most likely came into being quite innocently – as the trace of a spontaneous movement of the hand on a moist and smooth cave wall, or perhaps in the sand at the water’s edge. In Chin,a the ancient tradition of ink drawing without the use of a brush has been preserved to this day. The mythical, blind inventor of this ‘pure’ technique created the first Imago Mundi on the clay walls of his dwelling.

The first pictures – experiments, impressions, and signs, records of residence and movement – must have been connected with ritual moments of reflection and leisure time, mostly spent underground. They were not integral to survival, to an economy, to livelihood; they rather came into being out of feelings of insufficiency, tedium, or fear. They originated in near darkness, in isolation from the exterior world. They were gropings, formed into being with palms and fingertips smoothing over the clay interiors of temporary dwellings.

The first pictures – symbolic, pre-linguistic, and pre-ornamental – were concealed within the intimacy of the abode: the underground quarters where only reflections of sunlight fell and the flames of the fireplace drew and instigated fantasy and the play of shadows on stone walls.

2. In the age of hunters and gatherers, images became infused with the spontaneous and conscious movement of the human hand in contact with the malleable material brought forth from the world. The faint idea of the line – of a mark as an image of the world – was mulled over by those who drew. A million years ago in southern Africa, a scar, like a trace of the index finger, somehow remained visible in the sand or in clay. Millions upon millions of signs have been layered upon that first symbolic relic of the sign, forming a boundless hypertext of the history of civilization.

3. From this moment on, the mysterious split between the world and the image has developed in limitless variations and mutations. Every second, a myriad of signs, lines, and letters are distributed electronically and “per pedes” from place to place, from a certain time to the future, all finding their way to the halls of the archive. A continuous and insistent line connects the past with the present, times long gone with a brush connect with the computer mouse, an ornament on Paleolithic earthenware with Silicon Valley’s computer matrices. From that certain wondrous moment of the Paleolithic, human genetic memory has retained the faint recollection of the miracle of the pure; the magical trace of motion in the wavy line; of the concentrated gesture; and of the ferment engraved upon the earth‘s surface reflected in the tattooed body, in the melody and lyrics of song, or in the rhythm of dance.

4. The notion of the First Picture carries with it the sense of lost purity and melancholy to which the artist’s subconscious must return during the process of creation. The fossilized draughtsman was very likely pleased with the First Picture. It was at once meaningless and essential and burnt with the brand of the hand’s gesture, which belonged to neither the shaman nor the artist, to neither the illusionist nor the illustrator. The single, unsteady, inconstant, and ephemeral line has torn apart the universe above and below, to the east and west; has divided time into past and present; into a linear notion and a singular sequence; into the image of hurled stone, its angle of incidence, and the feeling of stone held in the hand. The mark of the line – with it we encounter the irreversible division of the world into two: light and dark, dead and alive, fast and slow, cold and hot; the separation of the face and mask, of thought, gesture, and the word. The imaginary horizon of the image drawn by the human hand onto the surface of the nomadic dwelling has estranged the Nature of cyclical repetition from our fear of the dark, from death, and from the magical experience of existence.

5. Encoded within the curved line are echoes of the ocean’s primary element and the rhythm of the walking, running, breathing body, of the beating of the heart, the ecstasy of the ritual dance or of sex. The wavy line is the sum total of the circular and linear. Thought and body experience the amplitude of the curved line as they would the fluctuating voice and quivering strings during the delivery of songs long forgotten which, according to their myth, had fused together the fissures of the world. The serpentine line encompasses the meander, the current of the river in the lowlands, the traces of waves reaching the shore, the flight of animals through the high grass, the rhythm of the wind on the steppe. The sinuous line is not solely nostalgic and archetypal: it is visible in the microstructures of material, is repeated in the circular and curved motion of invisible elements – the vibrations of electrons around a void, the waves of light, or the interference of sound waves.

6. With the multiplication of waves, the line becomes a network or a web, which brings forth water and entraps bait. The curved line returns repeatedly to its own axis and to its dynamic balance. It skirts around Euclidean space and mathematical categorical imperatives of the shortest distance between two points. The rippling space and surface is the mark of natural organisms: schools of fish in the sea, labyrinthine paths of termites, insect dwellings, trails of crabs in the sand. A drawing of meanders has the character of an individual experience, but refers to collective events unfolding throughout the common experience of ritualized time. One fluctuating line corresponds with the countless
others that conceal, dematerialize, and induce the creation of others. The threads binding a picture together become the flickering poles dissolving the discernible single element. The web of this net seizes the gaze of the eye.

7. The magical power of the picture’s surface – an infinitely complex combination of elements and layers – arises from the sensual process of the intrigued, meandering eye’s search for order and sure footing on a surface collapsing into the depths. The permeation and layering of sinuous, colored lines within the picture’s composition originates optically – it is an aurally-minimal structure which the viewer approaches as if entering a landscape or the forest. A walk through a forest or through reeds – surroundings of seemingly ceaseless repetition – demands heightened attention and a sharpened sense of orientation, an adaptation of the senses to estimate between what is distant and immediately nearby. It brings a different type of experience to the body, one with indistinct boundaries. The unfamiliar and restless Forest, an age-old metaphor for the subconscious, diffuses sharp contrasts of light and shadow, color and sound, reality and imagination.

The image and the object experience mutual permeation and the expanded consciousness of the forest cleanses the vision of the factual world, of incessant stimulation and distraction, of objectivity, and of the three-dimensionality of things. Here the silhouettes of moving tree trunks and branches lose their materiality and singularity. The panoramic sensation of the forest is projected into the mind of the wanderer as a hypnotizing environment where hurry and false identity can be forsaken.

8. Because forests and time are continuously vanishing, it is necessary to cover a large canvas every day with one circuitous line and paint a web of a picture that never ends. If it is sufficiently large, it will be possible to enter its forest and experience the Orphean-sinuous passage of time. For the sake of this, the picture may be hung, after all, even upon the gallery walls.

This text was written for the exhibition of Petr Kvíčala "60 dní červené, modré a žluté" (60 days of Red, Blue and Yellow) at the  Galerie Nová síň, Praha, and at Veletržní palác, National Gallery in 1998. 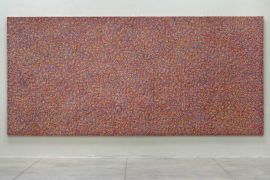