Zjos Meyvis: "What Happens to the Earth, Will Soon Happen to the Children of the Earth“

"What happens to the Earth, will soon happen to the children of the Earth"
From the oration of Seattle, chief of the Duwamish tribe, 1854
"The consecration of things that already knew a ritual existence, the admiring, or detesting, of elements, belief and disbelief, construction and deconstruction, life and death. The cycles which repeat themselves, and where I find myself unwillingly, the feeling that my cycle isn't synchronized with others is very obvious in my work. The irresistible urge to make a simple construction or fire and to consecrate this in a space are internal needs that arose out of a cycle of primitive rites from the unconscious relation with my past. This cycle I can't escape from. The question whether my work is or isn't art, beautiful or ugly, does not matter. It is essential."
Zjos Meyvis, 1992

Zjos Meyvis (born 1950) is a Belgian visual artist, living and working in Hemiksem. The first works of art he's ever put on display go back as far as 1974 and with that Zjos Meyvis has been active for more than 40 years. In 2015/2016, the Administrative Center and Music Academy (Administratief Centrum en Muziekacademie) in Hemiksem exhibited some 80 works of art spanning, grosso modo, the period beginning in the mid-seventies and reaching as far as the present day.
With his pollinators, Zjos Meyvis joins the ranks of such celebrities as Jean Tinguely of Switzerland and his kinetic works of art, or Panamarenko. Often his works are compared to what these artists have produced: that's why we won't be shy of any confrontation.
Zjos Meyvis functions in an essential way. Here it is all about the survival of mankind, the very essence of everything. Not one living creature on earth has eternal life. Not the sequoia: more than 3 000 years of age! Not the turtle: a meager 150 years! A whale perhaps, with its 200 years? Certainly not! Have a closer look and even then you will find that no creature is immortal. That's why they all have to procreate, with the emphasis on creating: yes, it's all in nature's genes. And so Zjos Meyvis never wants to conquer nature as Panamarenko would: instead he aims at giving it a little help from a friend. "If the bee disappeared off the surface of the globe, then man would have only four years of life left”: a true statement and attributed to Albert Einstein. 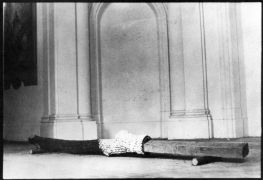