"From 1988 till now, I have been working together with various artists under the name 'Nieuw & Meer' (de Nieuwe Meer is an old empty army-bases at the edge of Amsterdam where there has been growing a new artists community for two years already).
During my squatter's history I have been involved in organizing art festivals. Working with different materials mostly found in a range of 10 km and using uncommon sculptural tools (chainsaws, sledge hammers, tractors, etc.). Often the sculpture goes together with a performance. I am busy with moving objects and the symbolic nature art."
Martin Stroober, 1992

About Niew en Meer artist´s community
Originally the Nieuw en Meer complex was a weapons and ammunition depot of Defense. The first buildings date from 1918. Until the early eighties of the 20th century, the site was in use for Defense. After the last conflict in 1962 in, at that time, ‘Dutch New Guinea,’ the military stores fell into disuse. On June 25, 1988 the buildings at Oude Haagseweg 51 at the outskirt of Amsterdam, were squatted by a group of artists and activists from the squat at Conradstraat 11.  One and a half months later, on August 10th, 1988, Stichting Nieuw en Meer was founded, paving the way for legalization. The participation of Prof. Ir. Kees Rijnboutt, at that time Government Architect, as chairman of the first board of Stichting Nieuw en Meer was of no small importance for the social acceptance of the squatted complex and for the legalization process of the property. The formal legalization in 1991, the lease contract between Stichting Nieuw en Meer and the City of Amsterdam marked the start of extensive renovations. Especially the two large warehouse buildings with a total floor space of 7200 m2 had to be transformed into more than 80 smaller individually accessible studios. The construction supervision was done by Casa Architects (Hein de Haan). A large part of the work was carried out by the tenants themselves. The establishment of the tenants association Niks Minder (Nothing Less) on June 24th, 1991 was the formal end of the legalization process of the former squats. The Association represents the interests of the tenants. 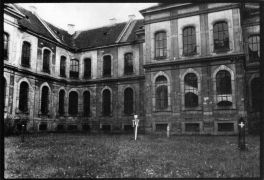