1. drawing (in refectory)
2. found object (in front of the convent)
Plasy Monastery 1992

"Mystery is a process of remembering and forgetting. As such, it has no image. Its absolute expression is the perfect form – harmony and functional mechanism. It is impossible to react to the monastery in Plasy in any way other than through an open gesture. The wooden mill expresses the certainty of existence. The tree trunk touching the walls demonstrates the interrelation of subject and object. Meditative touching of the walls demonstrates the interrelation of subject and object. Meditative drawings represent the result of concentration that follows. A hermetically closed space is illusive and dependent on the will of the beholder. Illusion and reality are indistinguishable and the way towards the self leads only to action, impression, traced in time and space. Either way purification follows and both must bring new activity, otherwise illusion becomes disillusion and sentiment turns to doom. It is not a matter of interpretation or description, of addressing or being addressed. It is a new, actual and eternal activity: between source, vehicle and receiver."

Jiří Kornatovský (born 1952 in Plasy) graduated in 1982 from the Art School in Prague on Hollar's Square, and in the years 1982-87 studied monumental painting and graphics at the Prague Academy of Fine Arts. In the following years, he participated in educational and creative sojourns at the Carmelite monastery in Sejna, Poland (1992), Florence (1993), New York and Boston (1994-1995) and Germany (1997). Currently, he works as a university teacher at the Charles University in Prague and the Faculty of Art and Design at the University of West Bohemia in Pilsen. In the late eighties, he made an impact with his monumental angular drawings of spherical, oval or cylindrical forms made by layering thousands of lines. According to the author, the act of drawing itself, the controlled movement of the hand and the whole body, is the very purpose of the work. With their artistic conception, these drawings completely elude the Czech artistic tradition. In total, Kornatovský has participated in over 60 individual exhibitions and more than 200 group exhibitions. 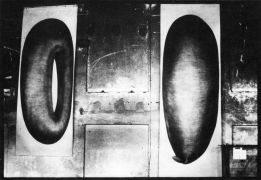 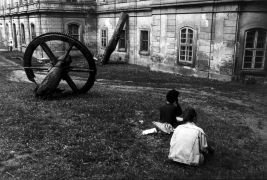