Since 1990 until 2003 Prof. Adéla Matasová was head of the Department of Alternative Techniques at the Academy of Applied Arts in Prague and visited every year with her students Plasy for a plenair.

Adéla Matasová was born 1940 in Prague. In the years 1954–58 she studied at the Technical College of Interior Design in Prague. During the period 1958–64 she studied at the department of monumental painting at the Academy of Fine Arts in Prague with prof. V. Sychra. She was awarded the UNESCO grant for a two-month stay in Paris in 1968.

In the second half of the 1960’s, the interest in relief making and sculpture prevailed in her work. She used synthetic resin as material for relief objects. A large individual exhibition in Prague 1970 introduced these works. In 1974 she was invited to project a performance event accompanied by the music by E. Varese in Ceské Budejovice. In the second half of the 1970’s she developed work with paper mass. Her paper reliefs combined with pencil drawing were awarded a prize at the Biennial of Drawing in Rijeka in 1982.

Since 1985 she has been using flax paper mass which enabled sculptural space shaping. She amplified her interest in motion and its activation in her exhibition in Prague in 1986. During the same year her work was presented at the art Fair ART 17 in Basel, in 1987 at the CIAE in Chicago and in 1994 at the Czech Art Festival in New York.

Since that she has been continuously making installations which define the space by plastic shapes and sound. She presented her sound installations in individual shows in Prague, Ustí nad Labem, Klatovy and Brno.

Now she works also with metal combined with steel mirrors. In 1993 she took part in the 3rd Minos Beach symposium in Crete, Greece, and in the International Symposium of Enamel in Filakovo, Slovakia.
Her works are represented at the National Gallery in Prague and oher galleries in the Czech Republic and abroad, as well as in private collections in Germany, USA, Sweden and Poland.

In 2000 she was visiting professor at the Department of Art at the University of Colorado, Boulder, USA. Since 2004 she was a vice-chancellor for art at the Literary academy of Josef Skvorecky in Prague, Czech Republic until 2005. She lives and works in Prague. 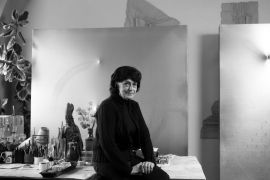