"When I think of monks of days long gone by, I visualize them in their long habits, their heads hidden in the big hoods. Only their hands are visible – working hands that are the earth – connected, expressing themselves both in movement and in rest; praying hands which make the connection with the spiritual World. Thinking thus, the following image emerged: I want to make photos of hands in all kinds of expression, from daily activity to 'heavenly rest.' Subsequently, I want to NAIL the hands on wooden blocks. With these I want to cover the whole surface of the water by chaining them together with a rope. This heaving plane of nailed hands might invite one to walk upon the water.
By asking the Plasy people to let me photograph their hands, I want to make a connection in different ways:
1.Between me and the Plasy-people when they give me 'their hands'
2.Between me and the monks of early days by working on this 'monkish work': I have to make a few hundred photos, a few hundred wooden blocks and prepare them till I can let them fly into the water. I am working on this, day by day, till the surface of the water, parts of the stairs and the wall are covered.
3.Between the Plasy-people and the project HERMIT, because afterwards they can come to the monastery to take the wooden block with the nailed photo as a souvenir.
4.Between the Plasy-people of these days and the monks of early days in the idea of 'PLASY-HANDS.' This process, and the opportunity to live here in the monastery together with the other artists, gives me the feeling like I am at the right place at the right moment."
Iris Honderdos, May 18th, 1992

Iris Honderdos studied at the Academy for Expression and Communication (AVEK), Leeuwarden and at the Academy of Art (HKU) in Utrecht. She has her roots in several different backgrounds. After having worked in psychiatry, she started a study with the AVEK in Leeuwarden to become a drama teacher, but she moved to the Academy of Fine Arts in Utrecht in 1986. Apart from three-dimensional work, she became fascinated by photography. As a freelancer she worked for several magazines. Apart from that, she searched for the ‘third dimension’: she wanted to escape the world of just points on paper, by combining it with other materials. She ended up creating large spatial installations.
In 1992 she was invited to take part in an international symposium in the former Czechoslovakia, just after the fall of communism. It was there she discovered the core of what would become so specific for the projects she carries out all over the world; Meeting people in new, unknown or difficult situations and translating those experiences into a work of art on the spot. She usually asks for a contribution like a word, picture or drawing. These ‘tokens’ play an important role in the final installation and make the process more personal, not only for the artist, but also to those directly involved. Iris documented the first Hermit symposium in 1992 through her photographs. 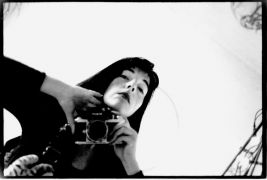 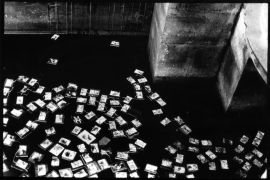