The installation was located in one of the water pools of the convent under the staircase.

Slide projector, electricity, and light box submerged in the water.

Jiří Černický (b. 1966) Is a Czech visual artist, creator of experimental and intermediary projects. In his work, he often moves between media. In his work, there is a socio-political engagement and a trespassing of social taboos. He is a member of the rock group Finnish Baroque, along with Petr Nikl, a founding member of the Zoom Theater. He graduated from the Academy of Fine Arts in Prague (1993-1997) in the studio of Miloš Šejn and Jiří David and the School of Applied Arts VŠUP in Prague at the studio of Adéla Matasová (1990-1993).

Černický’s work is full of expressive transformations, extreme gestures and also particular humor. Each work by this artist hides a strong story both in the content as well as at the level of seeking adequate expressive resources. Should we wish, nonetheless, to formulate a certain common denominator, then it is essential to mention first and foremost his incessant ability to express an almost childlike wonder and, at the same time, a willingness for open communication often exaggerated to the point of conflict. Indeed, it is these two components expressing strategy that allow Černický, as if part of perfunctory surfing trip, to expose the dominant waves on the surface of contemporary society. 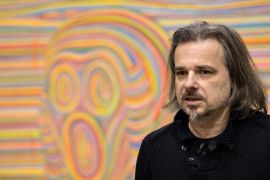