Martina Tomášková worked from 1993-1999 at the Plasy monastery as a guide for the Monument Heritage Institute of Western Bohemia. In 1994, she became a member of the Metamedia Center team. Together with Jana Šikýřová, the keeper of the monastery, Tomášková was the active sprit behind the first stages of the the Hermit Foundation project, the Friends of Art Association Plasy and the Metamedia Consortium.

When Šikýřová left the Monument Institute in 1993, Tomášková and the tomcat Damián became the keepers of the prelature, which was the building where the guests usually stayed during their residencies in Plasy. Without the help and the kind assistance of Martina over the years, the abstract ideas of Hermit could not have been materialized and continued. In 1999, Tomášková left Plasy and became the producer assistant of the artist residency program at the Soros Center for Contemporary Art in Čimelice Chateau. After that residency program ended, she moved to Šumava, where she lives in Hartmanice with her husband, two children and a dog, and divides her time between her family, mushrooming and working as an assistant in a special school. 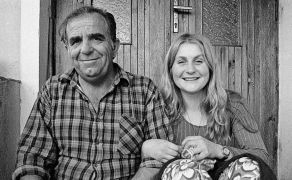