We live inside, drop in and see us!

Several quotes from books, describing the idea that inside the Earth is another, inner Earth.

A work in progress.

“Schwaller de Lubicz (1887-1961) compares the poles to the active (North) and passive (South), or male and female principles. Commenting on ancient symbolism, he depicts the movement from one to another as literally as the circulation of Kircher’s oceans: Let us note something not generally known: that is, that the North Pole and the South Pole repels, with respect to the masses of these rotating bodies (planets, etc.) Our North Pole hollows out the earth and it can be said to absorb the continents, whereas the South Pole extrudes earth and it can be said to create the continents. The entire mass of our continents is projected in a spiral motion toward the North Pole.

“As a young man in 1926, Giannini had been wandering through a New England forest when he had a vision. Guided by “his extrasensory perception” he suddenly realized that the earth was not round, but sort of spindle-shaped, and that the North and South Poles were illusory points. The earth’s surface, he perceived did not end at the points of the spindle but continued into space and curved back over our heads. What looked like stars, planets, galaxies and comets were actually “globular and isolated areas of a continuous and unbroken outer sky surface.”

This meant that these seemingly ‘heavenly’ bodies weren’t heavenly at all, but points of the vast land surface of the universe, part of which was the earth’s surface. There was no need to develop rockets to explore space, wrote Giannini for ‘space’ was an illusion created by the refraction of the lenses of our eyes, telescopes and cameras. All we needed to do to reach Mars or Venus was to climb into an airplane (or amphibious vehicle) with a very large tank of gas and fly (or drive) there. When Admiral Byrd flew beyond the poles he had proven Giannini correct — the earth did not end at the poles, but continued into ‘vast new lands’.”

“In would-be scientific theories of the Earth’s internal structure, beginning with the seventeenth-century treatise Mundus subterraneus (1665) of the German Jesuit scholar Athanasius Kirchner. Having visited Mt Etna in 1637 Kirchner devised a model in which chambers and channels of fire extended through the body of the Earth, along with a parallel system of internal rivers and seas. When the water and fire interacted earthquakes, volcanoes, springs and storms resulted. Kirchner’s view of Earth’s interior was thus one of violent convulsions — certainly no place for habitation. It had a clear appeal, however, for living-at-the-edge adventures, exemplified in Verne’s Voyage au centre de la terre (1864). An alternative structure was proposed by the astronomer Edmund Halley in 1672 to account for the magnetic variations observed by mariners. By analogy with the planet Saturn surrounded by its rings, Halley proposed that the Earth consisted of an inner nucleus suspended in a fluid medium within the outer sphere of our experience and went on to deal at length with potential objections to his theory. In its time, and for more than a century afterwards, this hollow Earth theory was regarded as a serious scientific attempt to explain observed phenomena such as variations in magnetism. However, fiction writers like de Plancy reversed the process and used magnetic fluctuations to justify an alleged hollow Earth. An amusing remnant of this association with magnetism survives in Verne’s novel”. 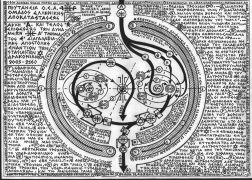