Peter Lamborn Wilson aka Hakim Bey; born 1945) is an American anarchist author, primarily known for advocating the concept of Temporary Autonomous Zones. In addition to his writings on ontological anarchy (termed lifestyle anarchism by detractors such as Murray Bookchin) and Temporary Autonomous Zones, Bey has written essays on other topics such as Tong traditions, the utopian Charles Fourier, the poet Gabriele D'Annunzio, alleged connections between Sufism and ancient Celtic culture, technology and Luddism, Amanita muscaria use in ancient Ireland, and sacred pederasty in the Sufi tradition. He has also written about pederasty for NAMBLA Bulletin. Bey's poetic texts and poems have appeared in: P.A.N.; Panthology One, Two, and Three; Ganymede; Exquisite Corpse; and the various Acolyte Reader paperbacks. Many of these poems, including the 'Sandburg' series, are collected in the as-yet unpublished DogStar volume. Currently his works can be found regularly in publications like Fifth Estate and the NYC-based First of the Month.

He has also published at least one novel, The Chronicles of Qamar: Crowstone. Bey, especially because of his TAZ work, has often been embraced by rave subculture, as ravers have identified the experience and occasions of raves as part of the tradition of "Temporary Autonomous Zones" that Bey outlines, particularly the "free party" or teknival scene. Bey has been supportive of the rave connection, while remarking in an interview, "The ravers were among my biggest readers... I wish they would rethink all this techno stuff -- they didn't get that part of my writing." 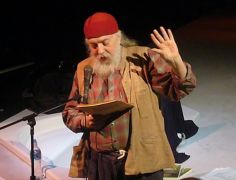