Marek Piaček (born 1972 in Bratislava) is a Slovakian composer, performer, improviser, lecturer. He studied flute at the Bratislava Conservatory (1986–1992) but his ongoing interest in unusual performance techniques led him to study composition, at first privately with Ladislav Burlas (1986–1988), from 1989 with Ilja Zeljenka, and at the Academy of Music and Drama with the same teacher (1990–1995). Zeljenka encouraged Piaček’s interest in experimental art, and thus hastened his disassociation with traditional forms (String Quartet, 1989). In his music, Piaček explores elements of every-day life and culture, allusions to pop-music. He re-creates and re-composes the music all around us, the music of the past… In Piaček’s works, art is a culture-creating activity which opens up space for him, and where something neutral, even trivial or aggressive (bad) is changed into something good, better, and of greater value – briefly, something that makes sense.

Peter Machajdík (born 1961) is a contemporary composer, sound and visual artist. He was born and grew up in Bratislava, and lives in Berlin, Germany. Peter Machajdík is a composer of a wide range of chamber, orchestral, electronic and multimedia works. In 1992, he was a guest of the DAAD Artists-in-Berlin Program. Early 1990s, he attended courses for composers at The Amsterdam Summer University and at the Forum Stadtpark in Graz, where he worked with Dick Raaymakers, Konrad Boehmer, Clarence Barlow, and Vinko Globokar. Once one of the central figures in the avant-garde and contemporary music scene in former Czechoslovakia for over 25 years, Machajdík was awarded a 1988 Luigi Russolo Composition Prize, a 2011 International Visegrad Fund individual artist grant, and the Ján Levoslav Bella Composition Prize. He is the recipient of a 2017 grant from the Slovak Arts Council. He is currently Visiting Professor at the Faculty of Arts in Košice.

Apart from their set, Peter Machajdík and Marek Piaček also performed during the festival with Hugh Davies. 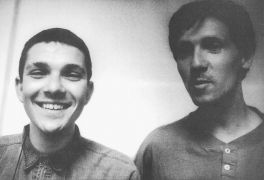